The superyacht industry and yachting community’s leading charity has released a summary of its activities in 2017. Over the course of last year, the San Diego-headquartered organization effected significant change for end beneficiaries in coastal communities around the world.

YachtAid Global fills an important niche in the humanitarian space. By utilizing superyachts to deliver aid and carry out humanitarian operations, it’s able to mobilize a fleet capable of reaching areas which are often off the well-beaten aid paths, as well as quickly move supplies into areas in need.

This was demonstrated in 2017 as an unprecedented number of hurricanes hit the Caribbean in quick succession. With those affected struggling to recover before the next storm hit, the superyacht industry swung into action to offer some much-needed relief. Named hurricanes Harvey, Irma and Maria tore through the region causing a preliminary estimated total of USD $281.14billion in destruction.

The season’s ten total hurricanes occurred consecutively, compounding the severity of the situation as residents struggled to re-establish the necessities of life between storms. In total, YachtAid Global delivered 325,000 pounds of aid to the Caribbean, including 83,000 meals, 48,000 hygiene kits, and over 6,300 tools.

Through its 12 years of operation, YachtAid Global has also forged crucial relationships with other NGOs which allow it to provide well-informed, timely and effective relief efforts. With partnerships that spread across organizations dealing in logistics, information and materials, YachtAid Global determines the type of relief needed and coordinates its efforts with other agencies working in region before carrying out any operations; ensuring any aid delivered is ethical and effective for the end beneficiaries.

Over the course of 2017, YachtAid Global worked with 44 superyachts as well as other vessels like Sea Shepherd’s MV Sharpie and Resolve Marine’s Lana Rose and more than 750 crew members. Regularly contributing yachts like Dorothea III stepped up to the cause once again to tackle the need present in the Caribbean after Hurricanes Harvey, Irma and Maria, alongside Slipstream, Va Bene, Katharine and Suri amongst many others.

Thousands of volunteers contributed to the cause, which is led by a core group of volunteers including Founder Captain Mark Drewelow, Executive Director, Captain Tim Forderer, Director Operations and Strategy, Captain Zoran Selakovic and worldwide ambassadors, Norma Trease, Michael Rettig and Bob Saxon.

The operations carried out by the organization are varied and last year reached 15 islands in the Caribbean alone, where essentials to rebuilding lives and creating self sufficiency like 60 chainsaws, 1,250 water filters and 1850 tarpaulins, amongst other supplies were delivered.

Over the course of the year, YachtAid Global used its unique position straddling the lines between industry, governments and NGOs to increase positive outcomes for beneficiaries. With increasing numbers in the yachting community eager to help, and YachtAid Global’s access to governments, logistics and ground truth information, the organization is able to coordinate operations and ensure supplies reaching beneficiaries is the right aid, for the right people, at the right time.

Moving through 2018, YachtAid Global is continuing to work closely with individual yachting families and groups in creating humanitarian aid operations which closely match both their cruising schedule and areas of interest.

It’s continuing to forge close relationships with other NGOs to increase the reach of its own work and help them to increase theirs, and in response to the marine community's expanding concern over the health of the world’s oceans and the people who depend on them, YachtAid Global is helping more yacht owners to become stewards of the ocean they enjoy so much. 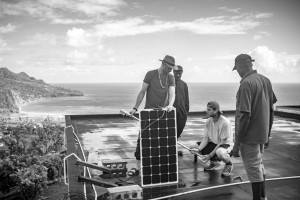 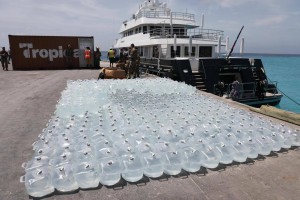 The hull of YN 20150 Project Oslo24 are now joined together