Gurit have spent more than 6,000 hours on the various Imoca 60

Take-off... tick. Intermittent flight... tick. Steady flight over waves and oceans... the loads are almost off the scale. Yet with the help of some brilliant composite engineering it’s happening

Since the first breathtaking pictures of Jeremie Beyou’s Charal in flight there is now plenty of evidence that this impressive display was no one-off party piece. For many in the Imoca 60 fleet, flying offshore with a seven tonne 60-footer travelling at well over 20kts in waves while balanced on a giant foil to leeward and a fin to weather is now the new norm. Little surprise then, that composite experts

Gurit have already spent more than 6,000 hours on the various Imoca 60 projects that they are involved with since the last Vendée Globe. Engineering a structure that can cope with such extreme performance has rarely been so important. Gurit Composite Engineering has been working closely with Imoca 60s for over 20 years. Since Ellen MacArthur’s famous Kingfisher, which was engineered in collaboration with Humphreys Yacht Design and Owen/ Clarke, the company has amassed considerable experience in this field which has contributed to seven of the eight new boats in this year’s Vendée Globe fleet using Gurit materials, while 12 campaigns have engaged Gurit engineers for aspects of their engineering. Of the new boats in the fleet, Charal, Hugo Boss and DMG Mori carry the signature of Gurit Structural Engineering in collaboration with VPLP yacht design.

The amount of time spent on individual projects has also increased.

‘When compared with the previous cycle, the time we have spent on this iteration of Vendée projects is up by at least 50 per cent,’ says Gurit’s principal engineer Paolo Manganelli. ‘As teams focus more on finding a performance edge, we are spending more time in the initial stages of the project where we are working on different design concepts and options to enable these performance gains.’

Over the last 20 years average speeds around the world have increased by around 30 per cent, with top speeds increasing by around 50 per cent, while structures have become lighter. And as the push for performance continues, the current crop is capable of performing a balancing act like no other, challenging the laws of physics and defying conventional thinking of what it is like to sail a racing boat.

Similar examples elsewhere are rare, apart from the America’s Cup which has led the foiling charge and seen huge leaps in performance over a short space of time. So how much has the Cup influenced or informed the new look Imoca 60s?

‘The Cup has certainly helped to develop tools and design processes to predict the boat’s behaviour and therefore the simulation of the loads,’ Manganelli says. ‘That’s been a big contribution. In addition, the ability to predict the flying attitude of the boats has also been improved thanks to the work carried out in the Cup.

‘But while there are similarities and links between the two areas, Cup boats return to the dock every day and have chase boats nearby. An Imoca 60 may not be back for a month or more, so we do face a very different set of challenges when it comes to the way in which these boats operate in their normal environment.’

For Imoca 60s, lifting the boat out of the water is one thing but the knock-on effects to the design, engineering and construction have seen significant changes elsewhere that have required a much closer cooperation between designers, builders and material suppliers than ever before.

‘The introduction of foils has changed the load conditions as the leeward foil works with the fin of the canting keel to lift the boat at speed,’ Manganelli explains. ‘So not only do we need to deal with the support structure of the foil itself but we now have to consider the additional loads that are put into the boat’s structure.

Below: the structural engineering version of the Rorschach test. Where a casual reader might see an abstract kaleidoscope of colours, structural engineers see the pressures, stresses and strains in the hull shell of a foiling Imoca 60. The lay-up of materials within the hull and its supporting structures is designed accordingly with a very high degree of precision

‘The structure around the foil is pretty complex and some of the design loads are of the same order of magnitude as those we have in the keel. So in effect we've added an extra righting moment producing appendage that puts a big additional moment into the boat. The result is that you've got a second major structural element to deal with on a similar scale to that of the keel and yet we are not really doubling the weight of the keel support structure in these boats. Instead, we're integrating the foil support structure into the keel support structure so that some of the elements are serving a double purpose in order to avoid adding more mass to the boats.’

‘The structure elsewhere in the boat has evolved too as we have several additional challenges to deal with. For instance, in the event that the foils hit something we need to make sure that the boat isn’t torn to pieces. The Hugo Boss collision in last year’s Transat Jacques Vabre is a good example where the boat suffered serious damage but made it back to shore.

‘To achieve this, we're making use of the experience that we've gained through a number of a foil support structure designs for projects involving Maxis, Imoca 60s, Volvo Ocean Race boats and others. So, it’s a complex design challenge, but it's not an unfamiliar one.’

But that isn’t the end of the issue. Just as changing the power delivery in a car will affect various other areas from the gearbox, brakes, chassis and so on, changing load paths and loading conditions will affect almost every component aboard the boat.

‘With this last generation, the combination of ballast tanks, canting keel and rake adjustment on the foils, there's so much to tweak and learn and adjust and so many parameters; it's a constant and fast-paced evolution. If you consider the performance progression of Charal from when she was launched up to now, the improvement is pretty extraordinary as it has been for others in the fleet. There was already some difference between the performance that was expected of the boat at the design stage, against what she actually delivered when she went sailing. And then there was another step forward between what she was doing a year and a half ago and what she's capable of now. The bottom line is that the pace of change has been incredibly quick and the learning curve steep. So the challenge for us is staying ahead of that curve. Working closely with teams is what makes this possible.

‘As performance increases, slamming is another critical area and while Corecell has become the material of choice for the core in the underside of the hull, we have been able to further optimise its usage thanks to the improved understanding of its dynamic behaviour. In the recent years we have gained extremely valuable insight into the properties of Corecell at high strain rates through extensive testing performed by our New Zealand office in collaboration with the University of Auckland. Some of that knowledge has trickled into our designs. Close collaboration with the teams is key to further improve our understanding of the new loading configurations that these boats are exposed to. ’

In dealing with many of the world’s top players including companies like CDK Technologies, and Carrington Boats, which have produced many of the most extreme offshore machines, along with younger businesses such as Black Pepper Yachts, who built Armel Tripon’s radical looking L’Occitane en Provence, Gurit’s technical sales manager Yannick Le Morvan sees this at first hand.

‘Collaboration is the key to moving these projects forwards,’ he says. ‘The detail with which the modern designs are being built means that the whole exercise is a collaboration rather than the previous relationship where the partners may have simply supplied materials and/or data. A good example of how this works in practice is in the construction of a laminate and the precise way in which the fibres are laid.

Above and below: Hugo Boss is one of 12 teams in this yearʼs Vendée Globe that have called upon Guritʼs composite engineering expertise to help design and build or modify their boats – thatʼs more than a third of the entire fleet. Guritʼs role isnʼt just limited to preventing things from breaking. It also helps the designers and builders ensure that when things do break – as when Hugo Boss hit a floating object in the Transat Jacques Vabre – they do so without tearing the boat apart

‘For a given area we are now incorporating more layers that are thinner and arranged more precisely to achieve the best structural properties. Where in the past we may have used a 300g/m2 fibre at 0° and say 90°, now a large proportion of the laminate is made from 150 gram plies laid in multiple directions. This means that the layup process has to be more accurate which in turn takes more time and, in some cases, requires a slightly different approach. The de-bulking process is more involved too as you have to get the air out from between every ply.

‘The more refined nature of the laminates also has a bearing on the cure cycles which are often more complex and where you need to understand more about the material science to create the best structure.

‘With these and other factors in mind it was great to work with CDK technologies because it is this kind of partnership that is helping to drive these projects forward.’

Not every team in the current Vendée Globe cycle had the luxury of starting their projects from a blank canvas. For teams like Isabelle Joschke’s MACSFand Boris Herrmann’s SeaExplorer (both benefiting from the collaboration between Gurit Structural Engineering and VPLP), upgrading a previous generation design to accept modern foil thinking required a subtly different approach in places. These boats were not originally designed with the current level of foiling in mind, making it harder to include sufficient structure to accommodate the new loads from the foils without increasing the all-up weight.

‘In these cases, in addition to providing sufficient support structure for the foils, you also need to make sure that you're not going to break existing structure elsewhere in the boat,’ says Manganelli. ‘You need to work around a layout that hadn't been really optimised for that foil size and position in the first place and you also need to take into account the increasing loads that are being transferred elsewhere. In addition, as the boats go faster, they will slam harder and so many of the earlier generation boats have ended up reinforcing their hull shells as a result of fitting new foils.’

Whether it’s a brand new launch or a reworked earlier generation design, this Vendée Globe cycle is already proving to be an innovative one before the race has even started. 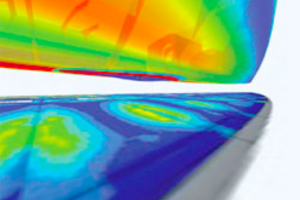 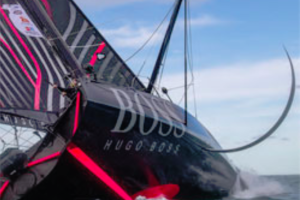 The latest beautiful megayacht from CRN of Ancona: M/Y 138