The Bridge, an unprecedented and historic race: Queen Mary 2 vs big sail trimarans

Paris, December 3 - On Friday, 2nd December, the press conference for the official launch of THE BRIDGE was held in the prestigious setting of the Salle Turenne at the Hôtel des Invalides. THE BRIDGE, a unique, festive, maritime, cultural and popular event, will take place from June 15th until the beginning of July 2017, in Nantes, Saint-Nazaire and New York. Supported by the Centennial Mission 14-18, THE BRIDGE pays tribute to the arrival on the French coasts of the first US troops to defend Liberty alongside the Allies and to put an end to the First World War. THE BRIDGE places this historical event, which has nourished a hundred years of Franco-American friendship, at the centre of its festivities.

Based on this idea, THE BRIDGE has invited the Queen Mary 2 to take part in an ocean challenge in a race against a fleet of giant trimarans following the route of the first landing of 1917. This will be an unprecedented maritime contest between the famous steel giant specially chartered for the occasion and the fabulous racing multihulls skippered by top offshore racers and their crews, THE BRIDGE will be the theatre of the Centennial Transat, a thrilling race between the bridge of Saint-Nazaire and the Verrazano Bridge in New York. Don’t miss it!

Departure on June 25th, 2017 under the bridge of Saint-Nazaire
“It is highly symbolic,” said François Gabart, one of the first four contenders of the Queen Mary 2, about his favourite challenge: a Northern Atlantic crossing from East to West. Departing on June 25th, 2017 and heading to New York where the prestigious liner, which will be cruising at 25 knots over the 3,150 miles (5,800 km) of the direct route, is expected to arrive in the early hours of the morning of July 1st, to be saluted according to tradition, by the torch of the Statue of Liberty.

The grand return of the Queen Mary 2 to Saint-Nazaire...
After Nantes, THE BRIDGE will continue in Saint-Nazaire with the return of the Queen Mary 2 to its port of construction. This will be an important event in itself for the City of Liners, whose history, culture, and economy are intimately linked to the sea and its industries. This exceptional charter, the fruit of efforts by THE BRIDGE Association to bring together a large family of public and private partners, was also made possible thanks to the mobilisation of the companies in the region. Driven by a strong entrepreneurial vision, the event expects 2,640 passengers, individuals and financial decision-makers to embark on the famous liner to follow the Centennial Transat live from front row seats. A historic adventure!

... Under multinational escort
The Queen Mary 2 is expected on Saturday June 24th in Saint-Nazaire, escorted by the Centennial Armada, an exceptional fleet bringing together ships from twelve countries out of the fifty involved in the First World War. On the following day, Sunday 25th June, the 345-metre-long steamer and the maxi-trimarans will set sail to the estuary of the Loire and the starting area of the Centennial Transat.

IDEC SPORT, a new contestant for the Queen Mary 2
Four talented and experienced offshore racing skippers have already responded to the call of THE BRIDGE and will be there with five crew on the start line. François Gabart (MACIF), Yves Le Blévec (ACTUAL) and Thomas Coville (Sodebo) of the group Ultim are amongst the first candidates for this unusual historic race. Most recently joining them is Francis Joyon (IDEC SPORT) and his crew, the latest entry for this maritime challenge, currently competing on the Jules Verne Trophy alongside the most serious contenders of the Queen Mary 2. Together with a further crew of five, these great offshore sailors will have to race at the top of they abilities across the 3,150 mile course (5,800 km approximately) against a cruise ship who will cross the ocean at full steam regardless of the weather conditions.

They said during the press conference:

Thomas Coville (Sodebo Ultim'): "Being a pioneer is the DNA of the Ultim' collective which brings together the owners of the biggest multihulls. Today, with THE BRIDGE, we have a meeting with history, with this new race, with this new concept and with the Queen Mary 2 ... "

Yves Le Blévec (ACTUAL): “A start in Saint-Nazaire, a finish in New York, it is a mythical journey that takes us back to the era of passenger ships and steamships. The race format, which brings together for the first time all Ultim', suits perfectly. "

François Gabart (MACIF): “It really resonates. One hundred years after the landing of the Americans in Europe, THE BRIDGE gives us the chance to do the return trip, to go to the United States to create the link to sailing and beyond. What is interesting about it is that there is a slightly different way of approaching the race, potentially bringing the media and the public closer to our boats and enabling us to run the race from the inside and give those privileged cruise passengers an amazing opportunity to experience it first hand.”

The main dates of THE BRIDGE:

The Queen Mary 2 will also host independent travellers. During the Nautic, THE BRIDGE organisers open up the sale of cabins on board the Queen Mary 2 giving those interest the option to follow the event all the way to New York.  Meet at THE BRIDGE area - HALL 1/J8. 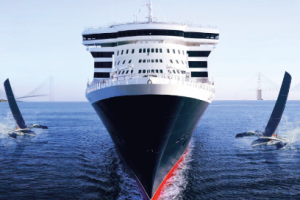 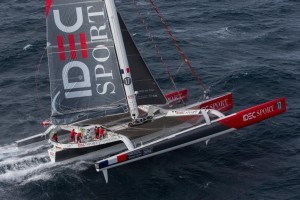 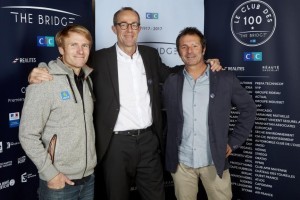 The Melges 40 Is Here

25 anniversary of the Destriero challenge

The crossing of the century aboard the Queen Mary 2