Full-Send Up and Down on Day 1

Nova Scotia kicks up hard for the Olympic skiffs

All the pent-up pre-regatta tension was set free on a wild and wavy race track on day one of the 49er, 49erFX and Nacra 17 World Championships in Nova Scotia, Canada.

Multiple nosedives and capsizes in conditions that kicked up to 27 knots with waves of 1.5 metres
First-time race wins at a 49er World Championship for Chris Taylor & Rhos Hawes (GBR) and Erwan Fischer & Clément Pequin
Dutch World Championships chit-chat their way to a dominant opening day in the 49erFX fleet
Good opening day for Finland and Sweden in the Nacra 17 fleet, but no one can touch the Olympic Champions from Italy

St Margarets Bay wasn’t meant to be like this, as local team Georgia & Antonia Lewin (CAN) commented after getting ashore from a challenging and at times wild first day of competition in the 49erFX. “I’m not gonna lie. It's been a long time since we've seen such great conditions with big waves and lots of wind,” said Antonia, the elder of the two sisters. “Today was plenty of fun and I think we're looking forward to climbing the leaderboard a little bit.”

Georgia, who steers the Canadian skiff, was hoping for a better start to the regatta, as they sit in 18th place overall, on equal points with their fellow Canadians, Ali Ten Hove & Mariah Millen. “I think we're both a little disappointed but it’s kind of to be expected a with a lack of practice in strong breeze. Their waves were super close together so we did a lot of nosediving today and had a couple of really close calls but managed to keep the mast above water.

Not everyone was so successful, and even for the skiffs that stayed upright it was tricky to avoid piling into the back of rivals who had just pitchpoled. The Spanish squad were looking tidier than most, with the two-time FX World Champion team of Tamara Echegoyen & Paula Barcelo (ESP) sitting in second after three races while Patricia Suarez & Maria Cantero (ESP) are in fourth. “We remembered a few things today,” smiled Echegoyen, the women’s match racing Olympic Champion from London 2012. “In flat water it’s easy for many teams to go fast but Paula and I love to race in the waves. A lot comes down to technique and we learned a lot from the Alonsos [one of the most experienced men’s 49er teams].” Barcelo admitted it got a bit scary towards the end of the three-race session but the trainee doctor still came ashore with a big, beaming smile after such a testing, exhilarating contest on the water.

For straight-line speed, a lot of teams envy the pace of the tall Swedes, Vilma Bobeck & Rebecca Netzler (SWE). “Yes, we have good speed and that’s a nice thing to have,” said Netzler, but they also suffered a capsize. “I asked Wilma to pull a bit more jib on and all of a sudden, I saw myself in the water and she just let go of the tiller instead. So we capsized to windward but we managed to make up some good ground on the final lap with our speed and picking a better layline into the finish when we overtook a bunch of boats.”

Vilma added: “With the capsize, the good thing is we are good at putting the past in the past, so we move on and we focus on what’s important in the next moment.” It’s a skill that’s easier explained than executed, but it’s standing this new team in good stead as they sit in second place overall. Ahead of them is NED 1, the sail number of Odile van Aanholt who won the 2021 World Championship at a light-airs regatta in Oman eight months ago. Recently teamed up with Annette Duetz, the two-time World Champion and Tokyo 2020 Olympic bronze medallist, van Aanholt proved she is no one-trick pony after dominating three breezy races with scores of 2,1,1. “I was a bit surprised,” van Aanholt admitted. “Sometimes I still get a little tear when I have days like this because it’s heavy breeze and there’s just such a nice energy in this team and there's so much confidence.”

Van Aanholt is nearly always smiling and she was grinning for much of the way around the gnarly race track. “There were moments when I thought I was having a bit too much fun. I was talking about the beautiful scenery and we had this drone following us around so we got a bit distracted. But on the downwind you really have to focus because you don't want a pitchpole into the waves. And then on the upwind we felt like we had some time to chat and that was nice.”

Time to chat. Probably not in the vocabulary of most sailors on such a big day. But plenty of war stories for everyone to talk about this evening as everyone seeks shelter from the stormy weather which is expected to blow through by the morning for a gentler day on St Margarets Bay.

The 49er sailors in this world championships are no strangers to big breeze and solid waves, but only one race was sailed on this first day as the fleet sometimes struggled through the choppy and gusty downwind legs.

“We made it through all of our bearaway’s, it was the gybes that got us,” said Japanese crew Tim Morishima. He explained that the steep chop made it nearly impossible to avoid stuffing the bow in the middle of a turn. In one of the 49er fleets all but about eight boats capsized in the single race of the day.

With the last two Olympic Champions absent from this quadrennium, that leaves double bronze medalists Erik Heil & Thomas Ploessel of Germany as one of the teams to watch this week along with current world champs Bart Lambriex & Florian van der Werken of the Netherlands. Both teams finished outside the top ten today. 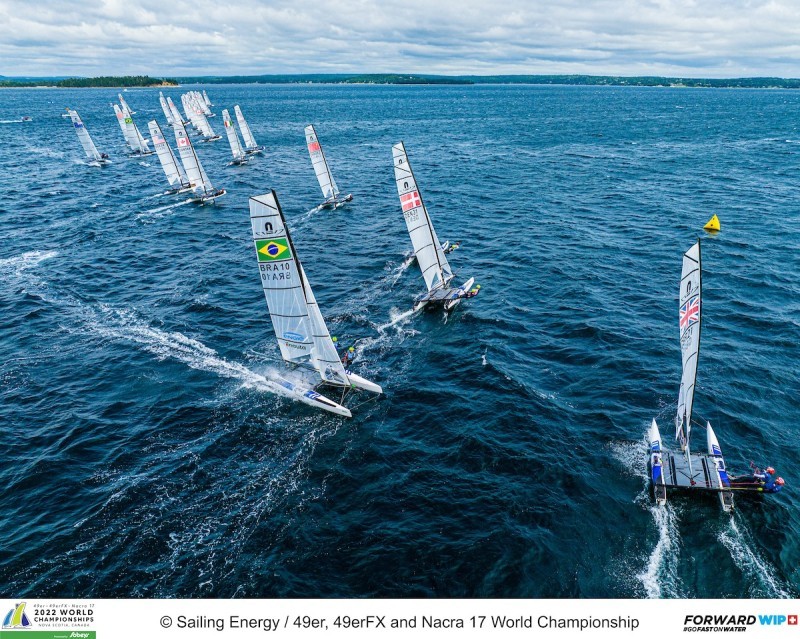 Full-Send Up and Down on Day 1

There was no hesitation to hoist the gennaker on the Nacra 17 course today for day one of the World Championships despite 24 knots and four to six-foot waves on St. Margaret’s Bay. “We had to send it for all it’s worth,” said New Zealand Nacra driver Micah Wilkinson about his approach to the day’s racing. “There’s never any backing off."

It was the current Olympic champions Ruggerio Tita and Caterina Banti of Italy, however, who demonstrated the “full-send,” foiling upwind and down, and winning all three races. Wilkinson and crew Erica Dawson had a clear view of the Italian’s technique finishing second in the final race and are sitting in fifth overall.

(Tita and Banti sending it downwind)

“Now it’s kind of about who’s learning the quickest,” said Wilkinson about the fleet’s progression with the new adjustable rudders that allow the boats to foil in more control upwind and down. The loads on boat and sailors are now higher a result of much greater righting moment, taking its toll on both.

“I feel like everyone’s getting closer except for those Italians at the head of the fleet,” said Wilkinson. “We got close to them last time but in the first races they were just launched. They’ve got so much upwind boat speed.”

The Kiwis have been trying to break a pattern that sees three strong Italian teams consistently sailing in the top five at all the major events. Sinem Kurtbay & Akseli Keskinen of Finland and the Swedish pair of Emil Jarudd & Hanna Jonsson, in second and third respectively, had by all accounts epic days on the water with tidy score lines sandwiching them between the leaders and Italian junior world champions Gianluigi Ugolini and Maria Giubilei.

It’s still early days in this world championship, far too soon to identify any performance patterns but the next two days are likely to dish out more diverse weather as the North Atlantic settles down after this ripping frontal passage moves eastward.