Short and sweet but utterly worthwhile was the tale of the tape today out La Sella del Diavolo, Cagliari, as Luna Rossa Prada Pirelli did their level best to squeeze more time-on-the-water as they run through their LEQ12 development programme. But mother nature was proving to be a tricky mistress all day with light winds dominating and the weather team doing their best to find a window.

No Jimmy Spithill today, so Marco Gradoni stepped in ably to take a turn on the wheels with Francesco Bruni in the opposite pod, but it was a shortened session through a fairing breakage with only approximately an hour spent actually sailing. The on-water recon unit observed: “It has been an unusual short day for the LR team. The LEQ12 splashed down at the dock (Molo Ichnusa) at 9:10am while shortly after a RIB was observed to leave the dock in order to check the wind conditions in the Gulf and eventually position some buoy marks. Certainly more and steadier wind was shown on the forecast. Instead, the conditions looked light and patchy with a thick cloudy sky.” 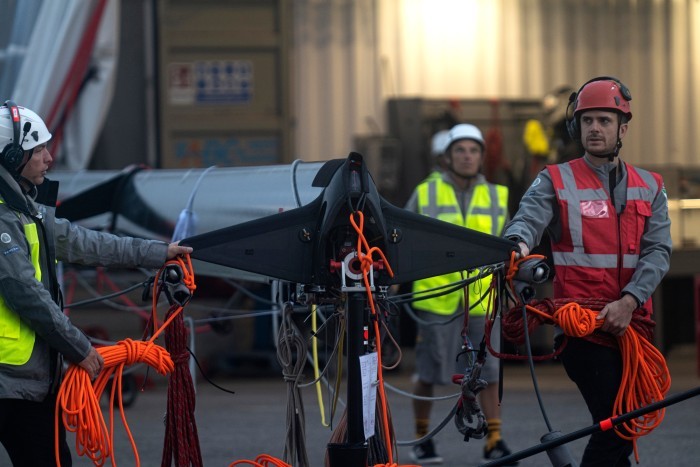 “On the dock some different routine checks were observed: structural tests employing a hydraulic cylinder between a rope along the mast and the forestay attachment.

This all under the severe supervision of the structural engineer and the design coordinator checking their screens. The team docked out at 10:30 and headed south toward la Sella del Diavolo (Devil's Saddle) to hoist sails and hit the SSW puffs of max 9-10kn. With the rain, the RIB towed up the prototype which started sailing. An issue on the port foil and perhaps an incoming front from the mountains of Capoterra, stopped the sailing day of the team which was not able to tow foiling back to port.”

As Horacio Carabelli, Co-Design Co-Ordinator for Luna Rossa Prada Pirelli said afterwards: “It was a pretty tricky day in terms of the weather, it was not easy, as inside there was less wind, and outside we were trying to get a window to get something out of the day.” But the team did get out and every second up on the foils is crucial to not only the main design team but also the sailmakers and it was noticeable today to see a GoPro camera on an enormous arm on top of the mast looking directly down the luff at the camber and monitoring how the team are controlling the overall shape through the various mainsail control systems. Co-ordinating mast rotation with luff camber, particularly out of manoeuvres, is an area of a lot of focus as maintaining the speed through the move and then powering up straight afterwards with the least movement on the rudder is going to be key to flight when the teams get to Barcelona. 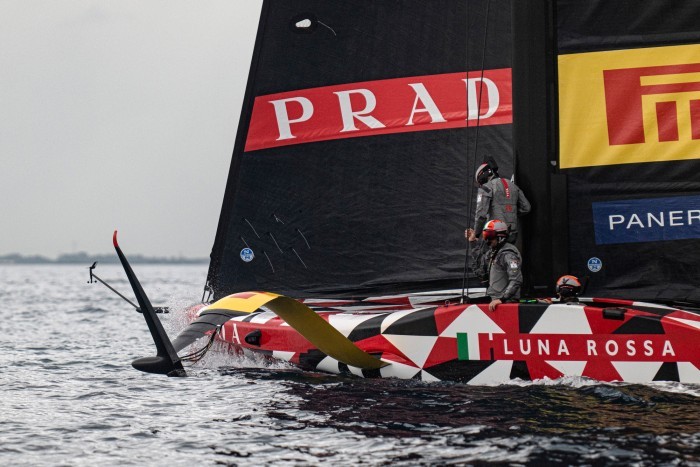 But these light weather days, frustrating as they may appear, are valuable days as Carabelli opined: “We have the crew in training who are getting used to the boat and trying to push it to the limits now that they’re pretty familiar with the boat. And getting used to pushing into good speeds and giving some answers that we always have in the design team to go forward in the development of new stuff and specially to know and understand more for the big boat.”

A rather dramatic looking foil fairing issue curtailed the session with the port side foil exploding out a whole panoply of wiring from the underside of the foil arm leading down to the foil. Carabelli played the issue down saying: “There was a little bit of an issue on one of the foils but nothing to be to be worried about and we will be back in the water pretty soon…It was a fairing that just popped out and we just need to bond it back again and next week will be there again on the water.”

And looking forward into the week before the team breaks for the festive period, the weather is looking light on the long range forecast. The Luna Rossa Prada Pirelli Team are still hoping to get a few days of training in as team member said: “Up until the Christmas break the weather is not looking very good but I think we can pull out a couple of days before the break. It would be great to have a good finish to all this development and a year that has been pretty tough for all of us from the shore and design (teams) and the full team in general - they have put a lot of hard effort onto this boat and I think that we have achieved nearly all the goals that we were we wanting to achieve at this point in the campaign.”

Recon Team Unit Notes: Observations: three foil-to-foil tacks with slower transitions and more seconds with both boards down, one gybe after which the LEQ12 splashed down due to lack of pressure or FCS issue, one bear away after which, due to its boat speed nature, it accellerated significantly but splashed down slightly afterwards.