Luna Rossa put the pressure in the other teams

Luna Rossa put the pressure in the other teams

A simply stunning day in Cagliari saw Luna Rossa Prada Pirelli’s chase boat team lay down marks for their innovative LEQ12 prototype and the sailors let rip at race pace, considerably upping the programme and putting the pressure on every other team in this America’s Cup cycle.

Hats off to the sailors today, led by helmsmen Francesco Bruni in the port trench and Ruggera Tita in the starboard trench, the six-man team aboard the yacht had it on rails and barely put a foot wrong. The bear-aways at the top marks were quite literally sensational, the gybes were breathtaking and all through the relatively short session the Flight Control was simply sublime. Upwind it was almost mesmeric to watch the boat low and fast, flying at a consistent height whilst the tacks were whipped-through at such speed that you almost blinked and missed it. Sail trim was accurate and it needed to be as the wind gusts tipped-in over the Bay at 15 knots plus, but the team had everything under control.

Dock out was relatively late, just before 11am, as the shore team checked and double-checked the new port foil that was declared today. The Recon Unit on the dock observed several team members inspecting the foil, Max Sirena, the Team Director being one of them eager to see the development and noted that they were: “focussing on the recently changed wing trailing edge behind the bulb for a perhaps unsmooth junction between wing and flaps.”

Whilst sailing, it was noticeable that the aft most crew-member on the port side was keeping an almost constant watch on the new port wing when sailing on starboard tack and gybe and the Italians are clearly committing huge resource and effort to this key area of development for the 37th America’s Cup cycle. 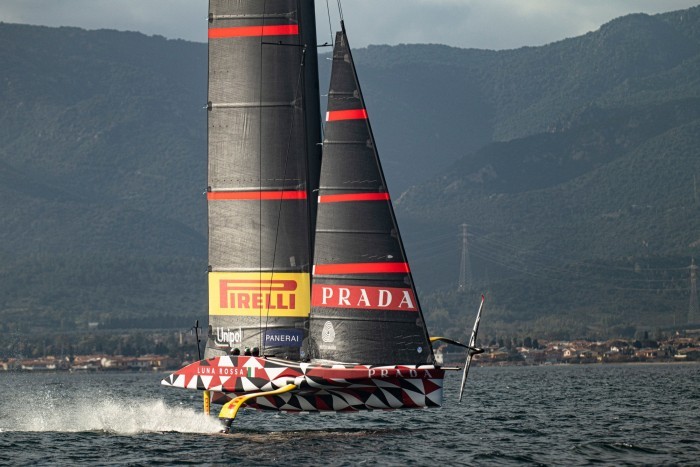 With the wind topping out at above 16 knots at midday, the team changed down to the traditional cut (no square top) J4 which they sailed on for a further two hours at full-on race pace and looked very comfortable in the process. A huge 70 nautical miles was covered in a little under three and a half hours with a total flight time of some 116 minutes – gold-dust for the performance analysts and data crunchers back onshore.

Meanwhile a total of 54 manoeuvres were undertaken today with the vast majority being foil-to-foil or touch & go. “A pleasure to see” was how the recon unit recorded it and Ruggera Tita, one of the new superstars of world sailing, gave a fascinating interview post sailing. Talking about rounding marks, he commented: “For sure this was the first day, it was a test because we didn't know if the GPS on the marks was working good, but yeah for sure we passed the test…but yeah was really, really, nice to round some marks.”

Every team will be analysing the recon footage in detail and as markers of intent go, this was an Italian declaration of professionalism, power, co-ordination and blistering speed. Impressive.

On Water Recon Unit Notes: The day at the Luna Rossa Prada Pirelli base started with roll-out at 9:00, while stepping the mast, some team members were observed gathered behind the port side wing focussing on the recently changed wing trailing edge behind bulb for an perhaps unsmooth junction between wing and flaps.

Boat splashed down at 9:30 and RIB left the dock to check forecast in the Gulf and place some marks to be rounded in the sailing session. Dock out was scheduled for 10:45, slightly delayed due to some maintenance on the uncovered steering control system.

As usual on a daily basis, team members were strategically placed to hide the Recon Unit any view from the recon square. Leaving the harbour, the team found steady offshore pressure of 8-10kn with flat waters and, after hoisting main+J2, headed to the marks.

The Recon RIB was placed on marks for closer observation when rounding and followed the prototype on several legs. The LEQ12 definitely looked on racing pace, foiling for 116 minutes inshore covering approx. 70nm including approx. 5 upwind and 6 downwind legs with an approx. total of 54 manoeuvres depending on lay line 4-6 tacks or 3-5 gybes per leg with an higher success rate for manoeuvres.

(Recon Notes: With 6 crew on board, the team is testing the behaviour of the prototype with additional weight as it seems only four are actually handling and controlling the prototype.)

(Recon Unit Notes: 3 tow-to-flys, 5 self-take-offs. With higher breeze, it has been observed the usual take off setup with a 4th crew member sitting on windward side deck and crossing right before take-off when the prototype has gained boat speed cambering the main sail. No crew crossing when self-taking-off in lighter breeze.) 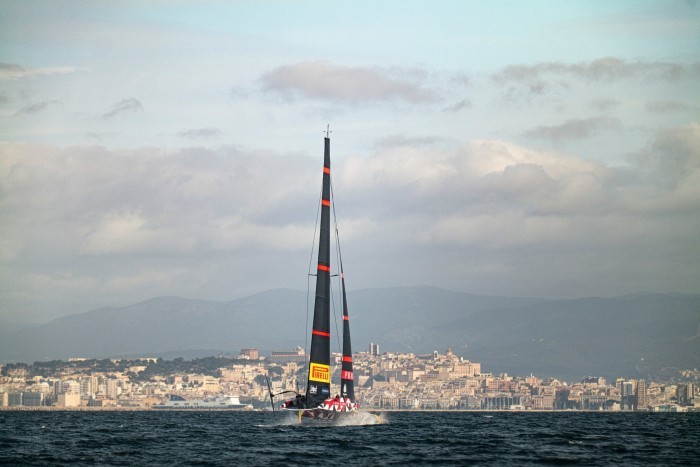 The Ocean Race, E-Race: beat the pros at their own game