MIAMI, FLA (date) - For nearly one century, the Bacardi Cup continues to attract the world’s top sailors and fans alike with its popularity and international intrigue. The event is celebrating its 91st anniversary in 2018 and for 56 straight years has called the beautiful waters of Biscayne Bay home.

Started as a regatta for Star Class boats in Havana, Cuba in 1927, the Bacardi Cup has continued to evolve and change with the times, giving the one-design class invitational continued growth and popularity in a sport and an international city that has seen numerous regattas come and go.

For 2018, the Bacardi Cup organizing committee has decided to refocus the series on the original idea of an invitation-only regatta where the best small-boat sailors in the world come together to compete in tight, competitive, thrilling racing for six full days with an emphasis on quality instead of quantity. Still sponsored by the venerable Bacardi Rum brand and the Bacardi family, who have been active patrons since the inaugural Bacardi Cup was presented in 1927, the series in 2018 will be called The Bacardi Cup Invitational Regatta. Only one other one-design class has been invited to compete in the Bacardi Cup in 2018: the exciting J/70 class, the fastest-growing one-design fleet in the world.

The organizers will welcome a stellar line-up of around 150 Star Class and J/70 Class boats when racing kicks off. As usual, the sport’s biggest names are attracted to the high-quality racing on offer, with the entry list already teeming with super-talented World Champions, Olympians, and America’s Cup stars. Teams from across the U.S. will be joined by an international line-up from Argentina, Australia, Brazil, Canada, Chile, Croatia, Denmark, France, Germany, Great Britain, Ireland, Italy, Mexico, Monaco, Netherlands, Norway, Sweden, Switzerland, and Ukraine.

Racing will be fierce as the sport’s best sailors battle for supremacy and attempt to shake off the hold of the reigning Star World Champions Eivind Melleby/Joshua Revkin (NOR) and the current J/70 World Champion Peter Duncan (USA) and his team. Right up in the mix of the Star Class line-up will be numerous big names, including Paul Cayard (USA) who has been competing at Star World Championships for forty years, alongside his yacht racing and America’s Cup career; Mark Mendelblatt (USA) a former Bacardi Cup victor and two-time Olympian; Diego Negri (ITA) who claimed a medal at each of the 2014, 2015 and 2016 Star World Championships; Iain Percy (GBR) holder of Gold and Silver Olympic medals and Olympic Silver medallist Xavier Rohart (FRA). Also in the pack is Robert Scheidt (BRA), the multiple Olympic and World Champion in the Laser Class, and 2008 Olympic Silver medallist in the Star Class - all hugely distinguished sailors whose performance on the race track will guarantees close competition.

Amongst those targeting victory in the J/70 is Jud Smith (USA) whose talents have secured numerous titles, and he was onboard to win last year’s J/70 Worlds with Duncan. Another impressive face at the front is Brian Keane (USA), who has raced the J/70 since the start and finished runner-up to Duncan last year. Italy’s Vincenzo Onorato, who holds World titles in the Farr 40 and M32, will be racing his well-known Mascalzone Latino with a formidable team including three-time Olympian and Gold medallist in the Laser Class and two-time Moth Class World Champion Paul Goodison (GBR). Fresh from a second place finish at the J/70 Midwinter Championship will be Joel Ronning (USA), who at that event outpaced Duncan into third and Keane into fifth. Top three finishers in any race, let alone the overall title, will be hard to predict in the J/70 fleet.

Racing gets underway in Biscayne Bay on Monday, March 5th for the Star Class. Racing for the J/70 Class commences the following Thursday. The Star fleet will compete in a single daily race, in what many today would call “endurance” style racing, which is exactly what the sailors’ relish. The J/70 fleet face 9 races scheduled across 3 days.

Post-race, the venerable Bacardi Rum brand, the locally-headquartered ‘king of hospitality’ which has sponsored the event since its inception, will greet and host competitors each evening, with great food, music and plenty of Bacardi rum. The nightly parties make sure the fun continues long after the finish line, as teams and supporters are welcomed to unwind shore side and recount the day’s racing highs and lows. Social events launch with the Bacardi Cup Welcome Cocktail at Coral Reef Yacht Club on Sunday, March 4th, The Bacardi Cup Star Class Party headlines on Monday, with the Bacardi Regatta Welcome Cocktail and Dinner at Biscayne Bay Yacht Club marking the half-way stage of the event on March 7th. Bacardi Happy Hours feature throughout the week at the Coral Reef Yacht Club, as well as a thank you party to the Race Committee and Volunteers at Shake a Leg Miami. The 2018 Bacardi Cup Invitational Regatta comes to a close celebrating the podium teams and all participants at the Bacardi Cup Regatta Prize Giving Dinner on Saturday, March 10th to wrap up what will have been another memorable event. 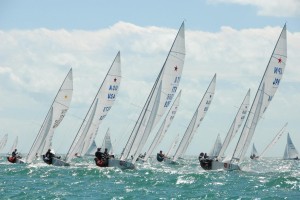 Evinrude, destination 2028 with 10 years of warranty on all E-TEC Engine

Closing in on podium at Bacardi Cup Invitational Regatta