Teams from 18 different nations have gathered at the Eastern Yacht Club for the 2018 West Marine J/70 World Championships. Ninety-One J/70s will be racing, representing the largest J/70 fleet ever assembled in North America.

After four days of measurement and inspection, action gets under way on Monday (September 24) with the practice race, followed by the Opening Ceremony held on the lawn of the Eastern Yacht Club. Racing for the West Marine J/70 World Championships will be held September 25-29, with 14 windward leeward races scheduled. 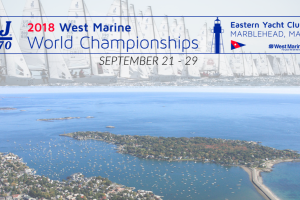