ZENDA, Wis. (April 19, 2018) – The 2018 Melges World League, featuring the sensational Melges 20 and super-charged Melges 32, is excited to announce North Sails as an official sponsor for a second consecutive year. Taking place across three continents (Asia, Europe, and North America), a combined total of 22 regattas are scheduled with the Melges World League, as well as World Champion titles set to be awarded in both fleets. North Sails has committed to supporting two of the most popular one-design/owner-driver Classes and will help the Melges World League deliver daily race media to a global audience.

The Melges vision of competitive racing combined with sailor support for the classes is closely aligned with North Sails’ - the Melges 32 and Melges 20 Classes are extremely competitive and considered a point of reference for high-performance one design racing. Boat owners and sailors alike have always had a close, special relationship with the Melges brand, many considering themselves as family. After a very successful first year of the Melges World League, it was a natural progression for North Sails to join the stable for the 2018 edition. 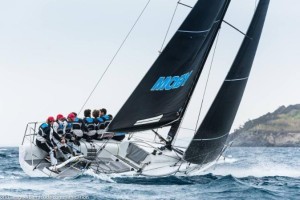 Azimut Yachts: art and design on board