Three spectacular races were held on Lake Garda in 14 knots of breeze today. The stunning race conditions ultimately inserted Italy's Matteo Balestrero at the helm of GIOGI in first place overall at the third Melges 32 World League event of 2018.
Balestrero, with the highly-accomplished Branko Brcin as tactician, progressively secured his early leadership, race by race to take the overall lead.

"It's a good start on a race course that is anything but easy to interpret, and does not go easy on you if you make a mistake," commented Brcin post racing. "Today we fought hard, especially in Race Two. The outcome for this event is still yet to be determined so, for now we are ahead. Our goal for the rest of the event is to go out and sail our very best."
The day opened with the convincing success of European Champions Edoardo Lupi and Massimo Pessina (Lorenzo Bressani, tactician) aboard TORPYONE finishing just in front of Balestrero, then Christian Schwoerer's LA PERICOLOSA in third.

Balestrero poured on the speed in the pre-start of Race Two, sprinting off the pin end of the starting line getting out front with a massive lead, crossing the entire fleet early on. Only reigning World Champion Pavel Kuznetsov on TAVATUY could keep pace with him finishing second, followed by Edoardo Pavesio's FRA MARTINA taking third.
Race Three was fantastic for Waldemar Salata's CASINO ROYALE from Poland. He improved his day dramatically with a first place finish, chased by Lupi/Pessina grabbing second, and Lasse Petterson in third from Norway sailing PIPPA. 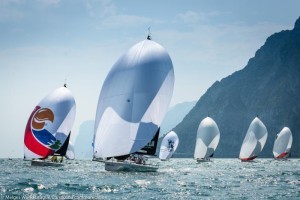 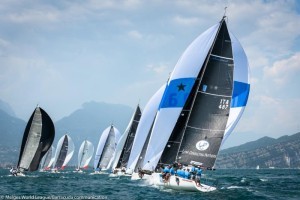