13 knots, flat water, sun, blue skies and the stunning backdrop of the mount Esterel overlooking the Bay of Cannes. Who could ask for more on the opening day of the  40th Régates Royales – Trophée Panerai, after two days of waiting for the right conditions? All sails up, the armada of 200 classics, Dragons and 5,50 offered a display of beauty and elegance and racing was as close as it could be.

“Spinnaker down!” At the downwind mark rounding, the crew of Moonbeam of Fife lowers the huge sail decorated with a black dragon. There are five men working to take in the sail while five others are trimming the mainsail sheet, as the boat accelerates upwind. What a show! Hallowe’en, the Marconi cutter nearly 25 metres long, is less than one boat length behind. The two yachts, designed by famous architect William Fife, are duelling as if they were having an America’s Cup match-race. This is close racing “classic style” at the Régates Royales.

Moonbeam of Fife, Kelpie, Elena are early leaders
Good manoeuvres, sails perfectly trimmed, right tactical calls: racing in the Bay of Cannes does not leave any room for mistakes.
In the Big Boats division, Moonbeam of Fife is leading the provisional ranking, having managed to keep at bay serious contenders like Mariska and Hallowe’en. Perfectly at ease in today’s medium wind conditions, the gaff cutter Kelpie (1903) leads on Kismet and Viola while among the huge schooners, with their immense sail plan of over 1,000 square metre, Elena sits in first ahead of Mariette. In the other group early leaders are Sagittarius (Classic Racer), Yanira (Classic), Cippino (Marconi de plus de 15 m), Fjord III (Marconi de moins de 15 m) and Vanessa (Spirit of Tradition).

Tomorrow, the weather conditions should remain ideal with some 10/13 knots of wind and another sunny, warm day.

The day’s number: 13
It’s the number of boats celebrating their anniversary, 50 years or older

She may fly a Spanish flag and have a Spanish name but Yanira, a Bjarne Aas’ design from 1954, is very much Aussie, sporting nine sailing stars from down under who are back for the second consecutive time to the Régates Royales. “It’s a fantastic regatta, these boats are magic. We will stay on the Cote d’Azur for two weeks, because after Cannes we’ll race in Saint-Tropez too.” says Phil Eadie, triple winner of the famous Sydney-Hobart, where he competed 38 times. It’s a group of friends perfectly at ease on anything that floats and who have sailed any kind of boats, from dinghies to America’s Cup flying catamarans. “We’re celebrating the 35th anniversary of Australia II’s victory in the Cup against the US defender Liberty. It was September 26, 1983.” Explains James Harrison, also a Sydney-Hobart winner and AC sailor. Yanira’s crew, whose average age is 69, aims at doing well in the Classic Marconi class against expert competitors Lys, Samurai and Argos. 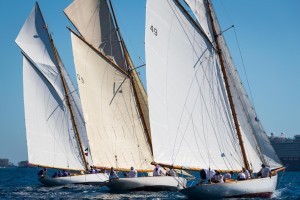 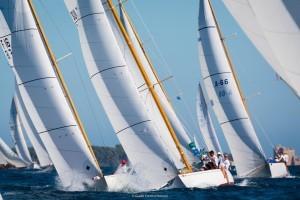 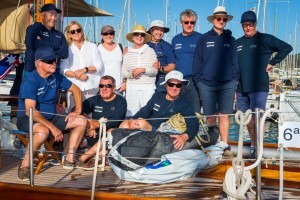 Régates Royales - Trophée Panerai : From all over the world

Trophee Panerai: The heat is on for the 40th Régates Royales