The 2018 Route du Rhum-Destination Guadeloupe fleet consists of a record-breaking entry of 123 sailors, six of which are female with three each racing in the highly-competitive IMOCA and Class40 divisions.

The organisers would be delighted to see more women taking part and will be hoping that the female skippers who set sail from St Malo for Guadeloupe on November 4th will inspire more to take on the challenge of the “Queen” of solo ocean races in four years time.

The female contingent in the 21-strong IMOCA class is led by the British veteran of the Vendée Globe and the Volvo Ocean Race, Sam Davies who returns to solo ocean racing on board the VPLP-Verdier design Initiatives-Coeur – a 2010-vintage hull formerly sailed by the French solo sailors Jérémie Beyou and Tanguy de Lamotte.

Aged 44 and living in Lorient, Davies is married to the Frenchman Romain Attanasio who is also sailing in the IMOCA fleet on board Pure-Famille Mary. “Even though I’ve done a lot of miles in recent years, between the Volvo Ocean Race and sailing with Tanguy, I haven’t competed in a major single-handed race since 2012, so it was crucial for me to train,” said Davies who has never attempted the Route du Rhum-Destination Guadeloupe before.

In the past two years, Davies has devoted considerable time to master her new boat. “I’ve been doing a lot of work to improve performance. I’m passionate about everything related to development,” she said.

Amongst those racing against Davies in the IMOCA fleet will be the talented Franco-German former Class40 sailor Isabelle Joschke at the helm of Monin. Joschke – whose mother is French and father German - started sailing as a child on lakes in Austria but it was a training session at the Glénan Islands off the Brittany coast that got her started on her professional career.

“It was as if I got bitten by a bug,” she says. “I made an about-turn and halted my literature studies to become a sailing instructor and then a professional skipper.” Joschke is sailing a 2007-vinatge VPLP-Verdier design formerly raced by the French skipper Yann Elies. Like Davies she has been working hard to get the boat ready and suited to her. Having finished the Transat Jacques Vabre in 2017 in eighth place, Joshcke will be looking to get to Point-à-Pitre safely but improving on that performance too.

The third female in the IMOCA ranks is the rookie in the class, Alexia Barrier, a 38-year-old sailor from Biot, near Antibes in France who finished the 2014 Transat AG2R La Mondiale in third place. Her dream is to sail in the Vendée Globe and she has taken a big step towards that with the purchase of 4MYPLANET, formerly the legendary Pingouin, a Lombard design launched in 1998.

Barrier has every confidence in her new boat and can’t wait to get started on her first Route du Rhum-Destination Guadeloupe. “I’ve done a lot of sailing in this type of boat and I’ve already tested her in 40 knots of breeze off Gibraltar – she’s like a safe,” she said.

Barrier knows that sailing the oldest boat in the fleet means there is no chance of vying for glory but she is hoping to have a good race with those around her. “I’m eager to compete in this legendary race and get my partners involved in this unique festival,” she said. “I won’t put pressure on myself if I’m at the back of the peloton, but if I’m sailing well there’s no reason for me not to play around with some of the other boats.”

The female element in the huge Class40 fleet is led by the veteran British skipper Miranda Merron who has a long history of participation in solo ocean races and will be starting her third Route du Rhum-Destination Guadeloupe having competed in both 2002 and 2014.

This time 49-year-old Merron – a graduate of Cambridge University – is at the helm of Campagne de France, a 2016 boat and she will be working hard to try and finish in the top-10. “This year I will endeavour to do my very best once again and leave as many lads and lasses in my wake as possible. It won’t be easy because everyone’s setting sail with the same game plan and the standard of the fleet for this anniversary edition is extremely high – I feel quietly confident all the same,” said Merron.

“The Rhum remains a magical race,” she added. “Being alone at sea is virtually a luxury. Just having the boat to manage and making the most of the sea and the wind is really quite special.”

Alongside Merron on the startline of 53 boats will be Claire Pruvot in her 2009 Lombard design who won world titles in women’s match racing in 2001 and 2008 and then completed an Olympic preparation before her career suffered a big setback when she suffered a mild stroke in 2014.

“It was hard to come back from it, so I was keen to do some longer double-handed and crewed races to boost my confidence,” explained Pruvot who hails from Caen and has a post-graduate diploma in applied economics. “The Route du Rhum is a race I was keen to do and the Class40 is rapidly expanding – the level of competition within it is really interesting, especially now,” she added.

Pruvot spent four seasons in the demanding Figaro circuit and she is hoping this will stand her in good stead as she takes on the 3,542-nautical mile course from St Malo to Guadeloupe. “I’d really like to finish in the top-15,” she said. “My past experience and my Figaro years in particular mean that I understand what competition is all about. In fact, it is one of the elements that prompted me to compete in the Rhum. I’m not in it just to cross the Atlantic.”

The third female skipper in Class40s is the rookie sailor Morgane Ursault Poupon whose father, Philippe, won the Route du Rhum in 1986, the year she was born. The 32-year-old from Nevez in France, who is a water management specialist focusing on sustainable development, will be sailing a 2007 Simon Rogers design and admits this will be the start of what she calls her “big adventure.”

“This is a kind of test race, a prelude to a sequence of others hopefully, over the next three years,” she said. “I have no ambition to win. My primary goal is make it to the other side, having battled as hard as I can, without breaking the boat or injuring myself. It’s important to not to get ahead of yourself – up against me I’ll have skippers with a great many years’ experience in these boats.” 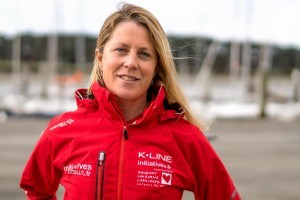 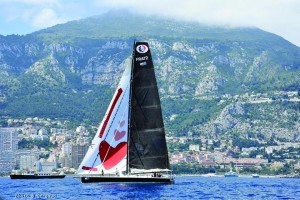 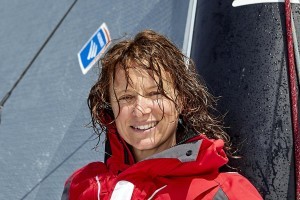 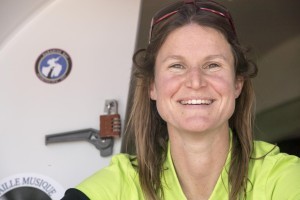 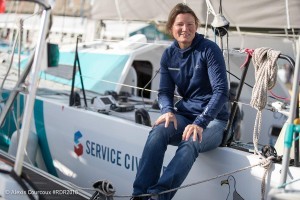 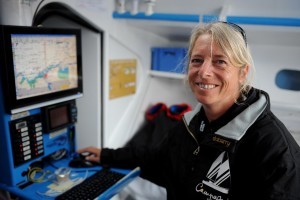