The French superstar sailor Armel Le Cléac’h has capsized in his maxi trimaran, Banque Populaire IX, in the most serious incident yet to hit the Route du Rhum-Destination Guadeloupe fleet as the skippers contend with a major storm in the Atlantic.

Le Cléac’h’s team said the blue and white trimaran turned over at 11.00hrs UTC while sailing at a position about 340 miles northeast of the Azores. At the time Le Cleac’h was contending with winds of 30-35 knots – which would have been gusting far higher – and five-metre weaves.

The boat appears to have capsized after its port float broke off. Le Cléac’h managed to trigger his distress beacon and was able to speak to his shore team. The Gris Nez maritime and rescue coordination centre in northern France has taken control of the rescue with the Race Director and the Banque Populaire team. The skipper is reported to be safe and sound inside his boat.

The capsize is the latest incident to hit the ULTIME class in which half of the six starters are now out of the race. First to go was Seb Josse after Maxi Edmond de Rothschild broke her starboard hull; then Thomas Coville followed Josse in seeking refuge in La Coruna in northern Spain when Sodebo Ultim’ suffered structural failure in its forward beam.

The class is currently being led by Francois Gabart on MACIF who is 175 miles north of Madeira with second-placed Francis Joyon on IDEC Sport 38 miles behind him. The only other sailor in the class is Romain Pilliard on Remade-Use It Again who is still in the Bay of Biscay, more than 500 miles off the pace. 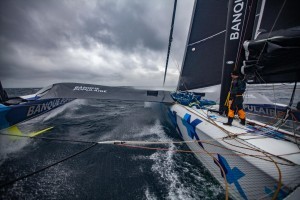 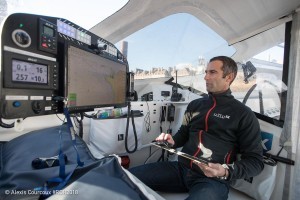