Sam Davies on Initiatives-Coeur (IMOCA) abandons the race: 'I can see my boat bending under my feet'

Sam Davies abandons the race: "I can see my boat bending under my feet"

As she faced very rough seas in the depression sweeping the Bay of Biscay yesterday, Sam Davies diagnosed a delamination of the bottom of the hull of her 60ft monohull, Initiatives-Cœur. Given the expected weather conditions off the Iberian Peninsula in the next few days and the nature of the damage, the option of a stopover in La Coruna to try and make a repair has been ruled out. It has been impossible to conceive of a scenario where Davies could consider her boat in a satisfactory and safe enough condition to re-start.  It is with enormous sadness that Davies has decided to give up her first Route du Rhum. The difficult decision was made to abandon the race and head back to the Initiatives-Cœur team base. The damaged monohull is expected in Lorient tomorrow afternoon.

“I discovered the structural problems yesterday. The first thing I noticed was that the skin of my ballast had delaminated. As I was making a tack, I was mopping up water in my living area and I heard the same noise as the one from the ballast, a creaking that came from the hull around the longitudinal reinforcement. Whenever that was slammed, I heard a creak. I looked everywhere, there was no sign of a leak. I assessed with my team that I could continue.

Once I regained some speed, I found myself on starboard tack and so I was leaning on the damaged port side. Whenever the boat slammed, I could see the hull bending under my feet, with folds appearing on the inner skin – that’s a little scary. I contacted the team to make an analysis with the boatbuilders. I was not feeling that relaxed. The problem is that we still had four days of these conditions, with a lot of wind and four days upwind, that’s a long time...I wasn’t very keen on attempting it, especially as the damaged area is in my living area, not far from the batteries. If there is any kind of tear in these conditions, I will find myself without battery power, communications and energy. So, I decided to turn around and head back to Lorient while the wind was pushing me in the right direction. I’m hoping to be able to protect the damaged area in the time it takes to get to Lorient. We went pretty well last night, there were still 50 knots and huge seas.”

Now it is the other goal of this project that Davies will solely focus on. The solidarity adventure continues, with the €162 000 that have been raised so far enough to save 13 children (The successful Initiatives-Cœur campaign supports the Mécénat Chirurgie Cardiaque charity, which enables children around the world to undergo cardiac surgery).
The meter is still running, and with each new follower and share of the Initiatives-Cœur Facebook page or Instagram, the sponsors-patrons, Initiatives and K-LINE, will donate €1 to the Mécénat Chirurgie Cardiaque association, with the goal still to save 20 children. 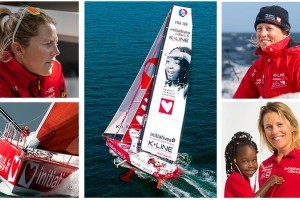 Metstrade Show sets to be largest and most inspirational to date