With such a big fleet now spread over a large area of ocean, skippers in the solo transatlantic Route du Rhum-Destination Guadeloupe are beginning to experience wide variations in weather conditions after three very challenging days at sea.
While there are still around 35 boats taking refuge on the French or Spanish coasts, out on the racecourse the leaders in the two fastest multihull fleets – the ULTIMES and Multi50s - and in the IMOCAs are starting to see easier conditions after the pasting everyone got on Tuesday.
But the weather picture looks very difficult for later in the week for the slower monohulls, especially the Class40s, which will be bashing into another full gale by late on Thursday. Those already exhausted skippers will be in tough racing conditions throughout the weekend before things ease down early in the week.
The question for many of the sailors who are currently in port remains when do they risk venturing out into the Bay of Biscay again as this second major weather system comes down the track? Some of them may well not reappear until late on Saturday or early Sunday and they will be delighted that the Race Director has extended the deadline for finishers in Pointe-à-Pitre by five days until December 7.
On the racecourse the battle at the front of the ULTIMES continues to be an absorbing affair between pace-setter François Gabart on MACIF and Francis Joyon still on his tail in IDEC Sport.
Gabart has revealed that he has incurred some damage to his mainsail battens but otherwise his passage into the northeast trade winds is unhindered and he should be into them by tomorrow.
“Now we are in the transition zone in the north winds which are not too strong, like 10-20 knots,” he reported from a position well to the west of Madeira. “They are quite unstable with a lot of trimming required. The sky is grey. We have one day (until) we catch the trade winds and go downwind. I have been able to check the boat and to make some repairs – I broke two battens in the main.”
The Multi50 battle is equally interesting with early leader Lalou Roucayrol on Arkema having now set sail from Porto on the Portuguese coast after taking shelter there. However Armel Tripon on Réauté Chocolat, who chose not to stop, is now around 240 miles ahead of him and in second place.
Ahead of him, Thibaut Vauchel-Camus on Solidaires En Peloton-Arsep is the current leader on the Tracker, but he is 350 miles north of Tripon. He is longing to get out of the cold and wet weather in the north Atlantic. “We are going to deserve these trade winds because this is the third front that I am dealing with in the west,” he said.
“It’s time to reach the heat! It’s too cold here, too wet and it’s very physical. During the day it’s fine, but at night I have to put on my survival suit to keep warm. I am looking forward to reaching the Azores where the sea will be warmer, flatter and where I can eat properly. I have only been able to eat one freeze-dried meal since the beginning of the race – the rest of my diet is based on energy bars and cereal bars.”

In the IMOCA fleet the longtime leader Alex Thomson on Hugo Boss is still making his more northerly and westerly option pay, with a margin of around 70 miles over Paul Meilhat on SMA who has now overtaken Vincent Riou on PRB to hold second place after a remarkable few days of tenacious racing from the SMA skipper. Behind them the 25-year-old Swiss sailor Alan Roura on La Fabrique is sailing an impressive race in seventh place, as is Boris Herrmann of Germany two places ahead of him on board Malizia II-Yacht Club De Monaco, the former Gitana.
Thomson looks as though he will hold onto stronger breeze for longer than those to the south of him and he could emerge with a useful lead once the top three boats settle into downwind conditions. Thomson has seen gusts of 50 knots and had some minor gear failure – he broke a lazy jack in his sail management system – but his main concern is that he doesn’t get trapped in light airs on his way past the Azores.
“The game is to get south, to the high pressure and the trade winds and the first person to do so will make the gain,” he said. “There is no doubt about that. There is a very strong possibility that all of us, or me, or the guys behind, are going to get stuck in the big ridge of high pressure, so that is a big thing at the moment – get south and try and pass the ridge.”
There were 12 IMOCAS on the racecourse today while in the smaller Class40s there were 35 out on the race track. The lead is still being held by Frenchman Yoann Richomme on Veedol AIC but there is an interesting north-south split in the top bunch with Richomme nearly 170 miles north-northwest of fifth-placed Kito de Pavant on Made in Midi.
Britain’s Phil Sharp in third place on IMERYS CLEAN ENERGY says the next few days are going to be challenging. “It was a tough night,” he said, reflecting on his second night at sea. “It was quite windy, there was quite a lot of swell and the boat was slamming pretty violently, so it was difficult to keep pushing the boat and it was difficult to try and find a compromise between safety and speed.
“My gut feeling is to get south,” he added. “Not just because it is warmer and sunnier and really nice, but because I don’t think it is going to work up north and it is looking like anti-cyclonic conditions will resume so yes, that is why I am going south.”

In the Rhum Multis there were just nine boats on the racecourse as most of the remainder continue to await improved conditions before venturing out. The first to re-join the race is Loïck Peyron who has now set sail on Happy from Gijón. The leader in that class, Pierre Antoine on Olmix, is now well south of the Spanish port of Vigo and making excellent progress.
In the Rhum Mono fleet eight boats are currently racing with the leader, Sidney Gavignet on Café Joyeux, now heading south about 270 miles west of Cape Finisterre.

Italian Andrea Mura has arrived in Lorient
Andrea Mura, skipper of the Open 50 Vento Di Sardegna in the Route du Rhum-Destination Guadeloupe, arrived safely into Lorient, France at around 1730 CET/1630 UTC this Wednesday afternoon. The Sardinian sailor, who finished runner up in the Rhum class in 2010, was contacted by Race Direction who report that the skipper confirms he and his boat are both OK.

After his capsize in the maxi-tri Banque Populaire IX on Wednesday, French sailor Armel Le Cléac’h, who is in good health, is on his way to Spain in a fishing boat which came to rescue him. His team, meanwhile, is working on plans to retrieve his stricken yacht which flipped over after its port hull broke away in big winds and seas. 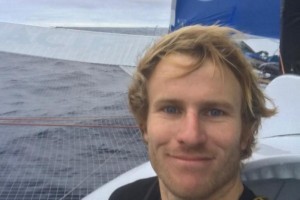 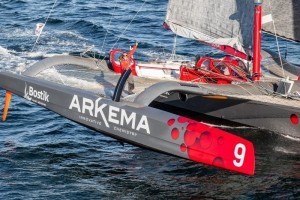 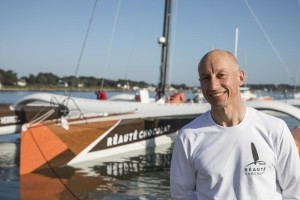 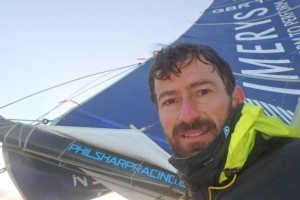 Joyon reveals how he stays awake in match race with Gabart