Sunshine and shorts time as Thomson looks to capitalize

After five days of tough racing in the 2018 Route du Rhum-Destination Guadeloupe solo transatlantic race from Saint Malo to Pointe-à-Pitre in the French Caribbean, Britain’s Alex Thomson is in good spirits and looking to put the hammer down on Hugo Boss.

Thomson has dominated the IMOCA class in this race, which features six classes in all totalling 123 skippers, and now that the bad weather in the north Atlantic is behind him, he is ready to enjoy the sunshine in the north-easterly trade winds.

The all-black Hugo Boss is leading a group of five boats that have skirted the eastern side of the Azores High pressure system and are now turning their bows towards the Caribbean at a position some 200 miles due west of Gran Canaria.

Thomson is currently listed as in second place in this highly competitive fleet by virtue of the fact that the German sailor Boris Herrmann on Malizia II-Yacht Club de Monaco is further west. But the German sailor is also 450 miles to north, on the other side of the light airs zone, and going upwind and in danger of running out of breeze.

This means there is every chance that Thomson and those chasing the Hugo Boss skipper in the trade winds – Paul Meilhat on SMA, Vincent Riou on PRB and Yann Eliès in Ucar Saint Michel – should overtake Herrmann downwind in the next few days.

Earlier today Thomson was enjoying a 14-knot northeasterly trade wind straight out of the textbooks on a warm and sunny day with blue skies and a blue sea – a great contrast to the angry grey hues of the north Atlantic over the last week.

He said he was lucky to have got through the High but is delighted to be on the south side of it with his boat in one piece after the battering it took in the early stages. “Now we have a 2,500-mile VMG race which is just perfect for me,” said Thomson. “I could not ask for better conditions for my boat – it’s easy to go fast and it’s less stressful.

“When I look at the positions of the other boats I am pretty happy – it’s not too bad at all. I am looking forward to getting myself into good condition and trying to race the boat as fast as possible,” he added.

The irrepressible Herrmann has not given up hope that he can convert his northerly route into a competitive position. “Everything depends on the high pressure and the ridge situation,” he reported. “A cold front is pushing from the west and helping to develop a new high.

“The models suggest I would be in the perfect position to just take advantage of it and slide through, but it remains highly uncertain. The formation of a new high is less accurate in the predictions than a big system. Now I need a big chunk of luck to still be in the race next Monday…”

Back on the magic carpet that is the trade wind belt – and roughly 1,300 miles further west of Thomson’s group - Frenchman François Gabart is eating up the miles to the finish in Guadeloupe aboard his majestic blue, white and yellow maxi-trimaran MACIF. Gabart has just over 1,100 miles go and could reach the finish as early a 06.00 local time on Sunday which would be well ahead of the current race record of seven days and 15 hours.

In the Multi50 fleet, meanwhile, both Thibaut Vauchel-Camus (Solidaires En Peloton-Arsep) and Erwan Le Roux (FenêtréA-Mix Buffet) have decided to make pitstops in the Azores leaving Armel Tripon (Réauté Chocolat), who is 555 miles south of them near the Canaries, with a clear track along the trade winds. Tripon is currently in second position just under 100 miles behind Vauchel-Camus but the deficit is decreasing with every hour.

In the Class40 fleet the leading nine boats are spread out on a north-south axis across 300 miles of ocean with the northerly boats still being battered by the latest storm to roll in off the Atlantic towards the Bay of Biscay. This produced headwinds of 35-40 knots with gusts of 50 knots and horrible sea conditions.

The Anglo-French skipper Luke Berry has been sailing a smart race on board Lamotte-Module Création and is waiting for the chance to repair his rig as he continues in seventh position. "The wind has calmed down a little bit,” he reported today. “I say a little bit, but we have still got 26 knots of wind and it’s still quite strong but a lot calmer than we have had in previous days.

“I’m relieved to get out of it,” he added. “The boats are still banging a lot but a lot less than before. It’s been quite a few interesting days of racing. I had never experienced that so now, as a sailor and a navigator, I am quite proud to have gone through that - wind up to 55 knots and some big, big swell.

“I have got a problem with the shroud so I can't tack which is a bit of a problem. Luckily it is on the right tack…hopefully it is repairable otherwise, I don't know, I will have to find another solution.”

Ahead of Berry the leaders are enjoying more comfortable conditions in the sunshine north of Madeira as they follow the IMOCAs around the edge of the High.

In the Rhum Multis the runaway leader Pierre Antoine on Olmix is sailing on a northwesterly heading towards the Azores and is still around 300 miles ahead of his nearest pursuer, Étienne Hochedé on PIR2. In the Rhum Mono class, sixth-placed Dominque Dubois on GHEO has been enduring dreadful weather in the western fringes of the Biscay while the fleet leader, Sidney Gavignet on Café Joyeux, continues on towards Madeira, 750 miles south of Dubois.

The 30 or so skippers who have been sheltering from the series of depressions that have dominated the north Atlantic weather picture for the last five days, will be looking to rejoin the race in the early hours of Sunday as the forecast steadily improves. The early part of next week looks generally light and tame compared to the storms that the leading skippers have been contending with. 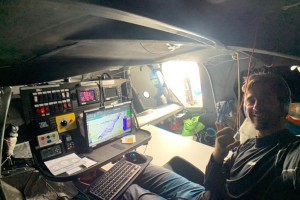 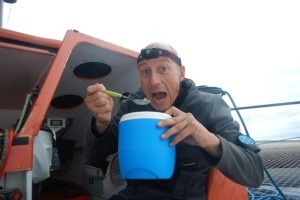 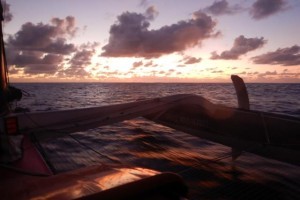 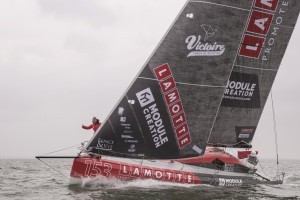 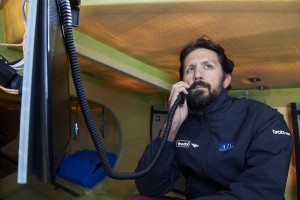