With less than 800 nautical miles to sail to the finish of the 2018 Route du Rhum-Destination Guadeloupe solo transatlantic race – from Saint Malo in Brittany to Pointe-à-Pitre in Guadeloupe - the French sailor François Gabart is on course not only to win the ULTIME class but to smash the outright race record.

After just six days at sea Gabart, at the helm of the maxi-trimaran MACIF, is now within a day-and-a-half of finishing the 3,542-nautical mile race and at his current pace he could break the existing seven-day, 15-hour record by as much as 10 hours.

But the diminutive 35-year-old from La Forêt-Fouesnant in Brittany wants this win in the ULTIME class to follow his victory in this race four years ago in the IMOCA division. He knows that his fellow Frenchman Francis Joyon on IDEC Sport has been on his tail all the way across the Atlantic and that – at around 120 miles behind – Joyon is ready to pounce on any mistake.

“Francis never lets go, but that is normal and, if it were me, I’d be the same,” said Gabart today, as his boat continued heading west in the northeasterly trade winds. “Until the finish line is broken the game is open. You need to give it your all to the end.

“I will do everything to stay in first,” he continued. “This lead in these boats that do 30 knots of speed is nothing. And having Francis on my tail is pushing me hard but I am still managing the risk, all the time. I could gain a few knots here and there if I took more risk, but I am pushing as hard as I can – there is no more on the gas pedal.”

This race is being contested in six classes and while Gabart heads serenely on, hundreds of miles behind him there are intriguing battles going on in the smaller boats in the 123-strong field.

In the Multi50 class the early race leader Thibaut Vauchel-Camus (Solidaires En Peloton-Arsep) has now made a very quick and efficient pit-stop in the Azores where his shore team fixed his broken mast-track and mainsail.

He has now rejoined the race in second place behind the new leader, Armel Tripon in Réauté Chocolat who is nearly 200 miles ahead and a whopping 600 miles further south than Vauchel-Camus.

A nice sporting touch was that when Vauchel-Camus stopped in the Azores, the shore team of his other main rival in the class – Erwan Le Roux (FenêtréA-Mix Buffet) who made a pit-stop after him – helped the Solidaires team to dock his boat.
In the IMOCA monohull class the leading group is south and west of the Canary Islands and well into the trade winds with Alex Thomson now comfortably ahead on Hugo Boss, from Paul Meilhat on SMA and Vincent Riou on PRB.

Meilhat is sailing a 2011-vintage boat with a distinguished history but it does not have foils and is equipped with daggerboards. By rights the 36-year-old Frenchman should be further back in this fleet but he has held position against Thomson all the way through the bad weather in the opening stages and kept pace with Riou.

Marcus Hutchinson who managed the SMA project until Christmas last year says that if the wind angles in the trade winds over the next week see the boats reaching then it will be very hard for Meilhat to hang on in the top-three as the others get up on their foils and race away. However if the wind is further aft then Meilhat has a good chance of making the podium.

“Paul is sailing extremely well,” said Hutchinson. “He knows that boat inside out in its current configuration and he is a bloody good sailor – even in the tough weather in the early stages there has been no drama because he was very well prepared.”
In the Class40 fleet, the leading bunch is following the IMOCAs south towards the Canary Islands before the skippers turn west under the Azores High. Yoann Richomme on Veedol-AIC continues to set a fierce pace ahead of second-placed Phil Sharp on IMERYS CLEAN ENERGY who is around 70 miles behind.

Sharp is relieved to be out of the westerly storm track in the north Atlantic and settling into calmer conditions further south and says the routing predictions give him a 10-day passage to the finish.

“The good news is that the new Lombard Lift Veedol rocketship is now going slightly slower than me for the first time in the race,” quipped Sharp referring to Richomme’s boat. “He could well be in lighter winds at the moment, but it’s a relief to see that the boat can actually sail at less than 10 knots!…I have a lot of work to do to catch up but I am hungry for it.”

In the two amateur Rhum classes – divided between monohulls and multihulls – the boats are spread far and wide and there are still many skippers taking shelter from the rough weather in the Bay of Biscay who should begin re-joining the race tomorrow.

In the Rhum Multi division Pierre Antoine on Olmix remains the runaway leader. Behind him Loïck Peron on Happy, a sistership of the small trimaran that won the first Route du Rhum back in 1978, is now up to sixth place as he heads towards the latitude of Cape St Vincent.

In the Rhum Mono class, spare a thought for 58-year-old Dominique Dubois on the 50ft GHEO who has been battling three storm systems in the Biscay and has struggled to make headway south. His track from the start shows Dubois heading west, then north as he runs downwind from the worst of the weather, then back south, then north again and so on. After six days at sea, he is still 160 miles north of Cape Finisterre and remarkably still in seventh place in the class. What is more he is still in good spirits despite his trials and tribulations.

In a recent message to the race organisation he was sounding pleased to be finally heading south after five days of “hell” as he rode out the worst of the weather. “He sounded fine, a bit tired but on good form, but his aim was just to ride out the storms until he felt it was time to go south,” said a race official.

As the first finishers near Guadeloupe, OC Sport Pen Duick, the owner and organiser of the Route du Rhum-Destination Guadeloupe, is delighted to announce a new commercial partnership with the world leading deckware and safety equipment manufacturer, Spinlock, which becomes Official Life Jacket Supplier to the race.

Spinlock is providing 50 of its award-winning lightweight lifejackets – the Deckvest LITE - to race staff and volunteers in Guadeloupe. They will be worn by local fisherman and other marine professionals, whose boats and crews are assisting the event management team with course marshalling, filming race finishers, ferrying race officials and hosting VIP spectators.

The partnership with Spinlock, which is based in Cowes in the UK, reflects the importance of safety for all the many staff and volunteers who help to make this four-yearly solo transatlantic race a success. 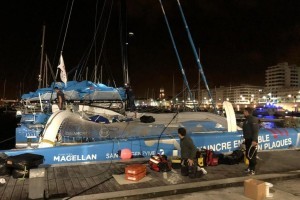 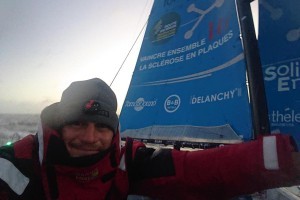 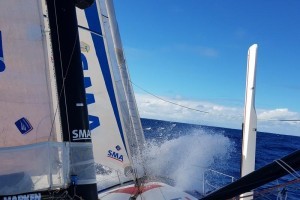 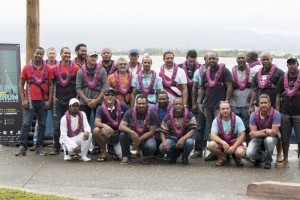