In the closest finish since it was first staged in 1978, the French ocean racing veteran Francis Joyon won the 40th anniversary Route du Rhum-Destination Guadeloupe solo transatlantic race from Saint Malo to Pointe-À-Pitre early this morning.

In the clammy heat and very light winds of the Caribbean night, Joyon, 62, glided across the finish line on IDEC Sport at 23:21.47 local time (03:21.47 UTC) to pip the poster boy of French sailing, François Gabart on MACIF by just seven minutes and eight seconds.

This concluded a heart-stopping finale in the ULTIME class to the classic ocean race which takes place every four years and started last Sunday off Saint Malo in Brittany, with six classes and 123 skippers competing in total.

Competing in his eighth Route du Rhum-Destination Guadeloupe, Joyon, aged 62, set a new record time for the 3,542-nautical mile course of just seven days, 14 hours and 21 minutes. This reduces the previous best time set in 2014 by the French sailor Loïck Peyron sailing the same boat as Joyon but under the name Banque Populaire VII.

“It was only one-and-a-half minutes before the finish that I realised I could win,” he added. “Before the last gybe François was faster than me with his Code Zero (sail) and practically all the way to the finish line I had a vision of him steaming in and passing me again because he was going two or three knots quicker.

“After the start and getting through the bad weather and now this finish, it was an extraordinary race,” he continued. “I am happy for the boat as there are no other boats which have won the Route du Rhum three times. I am happy too for my team; we are a little team but together we have prepared a boat which stood up to this Route du Rhum right to the finish and which arrived in a good state.”

Joyon only took the lead of the race at the final turn, the famous Basse Terre buoy, some 24 miles before the finish line as he and Gabart drifted their way around the windless west side of Basse Terre in the dark. 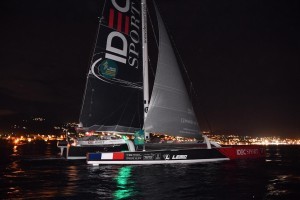 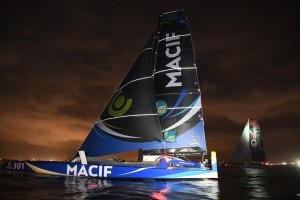 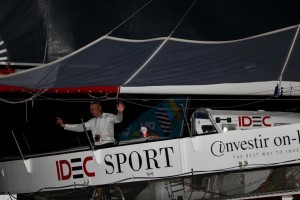