Tripon: I want to be the third finisher in Guadeloupe

Armel Tripon, the runaway leader in the Multi50 class, is hoping to be the third skipper to finish the 2018 Route du Rhum-Destination Guadeloupe solo transatlantic race from Saint Malo in Brittany to Pointe-à-Pitre in the French Caribbean.

Tripon on board the brown trimaran Réauté Chocolat, has just under 850 nautical miles to go to the finish of the four-yearly classic and is more than 400 miles ahead of his nearest pursuer in the six-strong Multi50 class, Erwan Le Roux on FenêtréA-Mix Buffet.

But his real rival for thrid place overall behind the two ULTIME skippers Francis Joyon (IDEC Sport) and François Gabart (MACIF) who finished in the early hours of Monday, is Britain’s Alex Thomson who is leading the IMOCA monhull class on Hugo Boss by over 180 miles.

Thomson is about 130 miles southeast of Tripon and the two skipers are pushing hard in their very different boats in the easterly trade winds. The Frenchman reported this morning: “Everything’s fine, but it was a complicated night with squalls and wind shifts. The first part of the trade winds were stable, but in this part in the south, there are big clouds everywhere. During the night, the seas got rougher, so it’s been a bit rock’n’ roll. I’m coping, but it’s a bit nerve racking.

“I’m aiming for third place overall. I’d like to finish before Hugo Boss,” added Tripon who finished fourth in the IMOCA class in this race four years ago. “Last time it took around 11 days. I’d love to finish tomorrow, as it’s starting to feel a bit long. I’m expecting to finish on the 15th at around one or two in the morning. But that may change, as I wasn’t very fast during the night. Maybe I will get there at first light in Guadeloupe.”

A long way behind the Tripon-Thomson battle, Thomas Coville on the giant trimaran Sodebo Ultim’ is trundling past Madeira after completing his second day at sea following his re-start from La Coruna in northern Spain where his boat was repaired. Coville is quickly catching up the only other ULTIME on the racecourse – Romain Pilliard on Remade Use It Again! – and is enjoying being back out to sea.

“There is plenty of wind, waves and sunshine, so it feels good,” reported Coville. “A race is never over until you finish…so we worked quickly to try to get the boat ready again to get back in the race. The team were incredible. They worked day and night. There was a lot of work to do. It was a race against the clock.

“I was so disappointed and on edge after stopping that I was determined to set off again to finish the crossing and to enjoy myself rather than stay ashore and I kept thinking about it over and over again,” he added.

“It was easier for me to move on by sailing and learning in crossing the Atlantic alone rather than return home. It’s not glorious, but it needs to be done to overcome the disappointment. Here, the boat is fantastic, doing 32 knots and riding the waves. We’re so lucky to be able to sail on these boats. The conditions are good and I’m enjoying myself.”

As they begin their ninth day at sea, the leaders in the Class40 fleet are dipping deep south in the eastern Atlantic, hunting for the best breeze to take them west to the Caribbean.

Today the third-placed skipper in the what was originally a 53-strong fleet of monohulls, Phil Sharp on Imerys Clean Energy, is less than 60 nautical miles north of the Tropic of Cancer and 585 miles north of the Cape Verde Islands as he continues south in search of a reliable corridor of wind to the west.

Sharp is currently about 750 miles west of the coast of Western Sahara. The longtime race leader, Yoann Richomme of France on Veedol-AIC, is about 130 miles west-northwest of him.

The British skipper has been trying to keep pace with Richomme whose boat is newer and faster, but he likes his positioning relative to the French skipper. “Imerys Clean Energy went really well in last night’s stronger breeze,” Sharp reported today. “Yesterday I actually saw Aina before he too gybed – a white spec on the horizon, about six miles northeast of me.

“Since entering the trade winds yesterday I have spent a lot of time on the helm as the spare pilot is not performing that well, and actually, it has been very refreshing. I am really enjoying surfing down the long Atlantic swells, which I am finding super-addictive and I am having trouble leaving for rest.

“My objective,” Sharp added, “is to try and be in slightly stronger breeze than the others, and continue to have an edge on speed and then, at some point, gybe back on the more favourable westerly heading. On the supplies front, cereal and porridge stocks are diminishing quicker than expected - must be due to all these long and sleepless nights.”

The Class40 fleet is spread out all the way back to a group of late starters still in the Bay of Biscay, north of La Coruna with around 40 boats currently on the racecourse.

The shape at the front of the fleet is all about a leading group of seven boats spread over 245 miles from Richomme, back to Antoine Carpentier on Custo Pol. Then comes Britain’s Jack Trigger on his own in eighth place on Concise 8 a further 100 miles back, followed by a pair of boats 80 miles behind him – Olivier Cardin on Région Normandie and Jean-Baptiste Daramy on Chocolats Paries-Coriolis Composites.

Behind them is a loose gaggle of boats, led by Miranda Merron on Campagne de France in 12th place, stretching 700 miles to the northeast to Emmanuel Le Roch on Edenred in 25th spot. The 52-year-old American skipper Michael Hennessy on Dragon is on his own in 11th place, but he is 300 miles west of his rivals and in danger of stalling as he gets too close to the centre of the Azores High.

Merron is enjoying going downwind and being able to dry her boat out after a long slog in the tough conditions that dominated the early part of the race. “A first week of mainly washing machine conditions (without the stabilisers), a few hours of reaching after the last front, and suddenly it's the long-awaited downwind sailing in the trade winds,” she reported.

“Having skirted round the east of the Azores High, we are now south and heading more or less for the Caribbean, but it will soon be time to gybe south again to avoid being trapped by no wind in the high. There are already moments of lighter breeze. It's still a bit too early to go, but it would not be a good place to get stuck. It's getting warmer and everything is slowly drying out. The chocolate should start melting now,” she added.

One place behind Merron, the French skipper Loïc Féquet on Tibco is in the same frame of mind as his British rival. “All is well aboard Tibco since we passed Madeira,” he reported. “It is finally the time to actually cross the Atlantic after the punishment of the first week. The boat is moving well all the time, good surfing at 19 knots; it is wet going down the waves but I can live comfortably on board now.”

Up ahead in seventh position, 250 miles behind Richomme, Antoine Carpentier is recovering after Custo Pol broached under spinnaker while he was asleep, allowing the sail to warp itself around the forestay. In order to untangle it Carpentier had to climb the rig. “I resigned myself to doing what I was forbidden to do solo – climb the mast,” reported the Frenchman who won the Transat Jacques Vabre last year in Class40 alongside co-skipper Maxime Sorel.

“I managed to undo the sail very quickly, the operation took less than 10 minutes in total, but what a rush of adrenaline!” added Carpentier. “Climbing the mast in port is simple, but at sea it's another story. With each wave the boat pitches and tries to push you off before gravity brings you crashing back violently. You do not let go of this carbon tube because otherwise you're dead.”

Current Standings
Top three skippers in each category at 1530CET on Tuesday, November 13 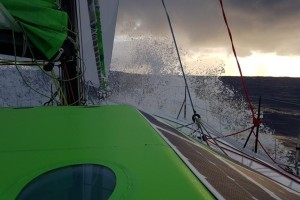 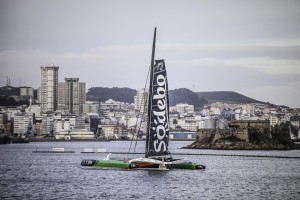 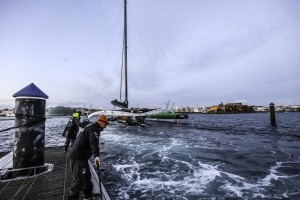 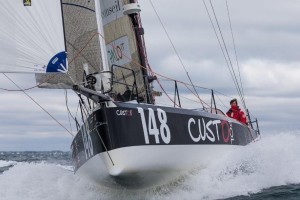 The first solar-powered Silent 79 catamaran is under construction