French skipper Lalou Roucayrol has capsized on his Multi50 Arkema. The incident happened at around 0630hrs UTC/0730 CET while Roucayrol racing in fourth place in the Route du Rhum-Destination Gaudeloupe, approximately 1,000 nautical miles east of Guadeloupe.

Roucayrol is safe and well inside his boat. He made immediate contact with his shore team to tell them of his capsize in a very sudden and violent squall.

A rescue plan is under way. He has access to food and water but has limited communication. He is in the trade wind belt with 20-25 knots of easterly wind.

Early this morning Sébastien Destremau and Ari Huusela had a minor collision when racing some 555 miles off the North African coast.

Destremeau is racing on his IMOCA Alcatraz It FaceOcéan in second place in the Route du Rhum-Destination Gaudeloupe's Rhum Mono division while Finnish airline pilot Huusela is in 11th place in the IMOCA division on his Ariel II.

Neither skipper is hurt although both report minor damage to their boats. Huusela has some damage to his pushpit on the aft corner of his boat; Destremau has damage to his bowsprit. According to race management Huusela also has some minor hull damage.

Huusela was sailing on a westerly course; Déstremau was heading south in search of stronger tradewinds when the collision happened at around 0600hrs CET.

Both carried on on their respective courses and have both been averaging 10-15 knots boatspeed. Huusela’s shore team are helping him with advice as he makes further checks to his boat.

Here is Vendée Globe veteran Destremau's account of what happened: "I was in my pilot bunk sailing at 200 degrees in 20 knots of wind. The boat gybed suddenly and broached over, and suddenly we were doing 14 knots. By the time I got on deck we were already back on course and I saw Ari's boat less than 100 metres downwind from me.

"It was an almost unreal occurrence. On first sight there is no structural damage but the base of my bowsprit is damaged and there is some damage to the bow. I made a running repair which took four hours and while I was waiting for it to set I went only very slowly. This is such a rare incident which reminds us all to be vigilant. It is all too easy when it is dark and someone is tired to misjudge distances." 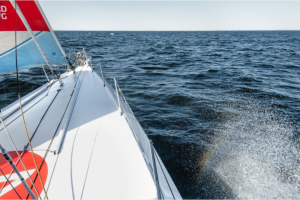 F.lli Razeto & Casareto: Luxury Handles in the Super Yacht Pavillon at the METS

The "Regulator 28", ultimate performance at every turn