French skipper, Armel Tripon finishes in first place in the the Multi50 class

Blessed with bright Caribbean sunshine and a 20-knot trade wind for the final passage around the island of Basse Terre, French solo skipper Armel Tripon today won the Multi50 class in the 2018 Route du Rhum-Destination Guadeloupe.

The 43-year-old solo ocean racing veteran from Nantes crossed the finish line off Pointe-à-Pitre on his brown and white trimaran, Réauté Chocolat, at 16:32hrs local time this afternoon (20:32hrsUTC/21:32hrs CET) and becomes the third finisher in the four-yearly 3,542-nautical mile single-handed race from Saint Malo in Brittany.

Tripon’s race time was 11 days, seven hours, 32 minutes and 40 seconds. He missed the class record for the race set by Erwan Le Roux in 2014 – who is on course to finish this race in second place behind Tripon today  - by just two hours and 19 minutes.

The sun was just starting to set as a relieved and delighted Tripon brought his multihull alongside Pointe-à-Pitre's victory dock, in front of the iconic Memorial ACTe dedicated to the history of the slave trade.

“I am very moved by the excitement of this finish but with it comes such a release of pressure," admitted the shaven-headed Tripon. "The stress is just constant in these boats. It wears you down. So here I am, burned out. I am cooked. But I am so, so, so happy for this team."

The 43-year-old Frenchman who is in just his second year in the fast, light Multi50 trimaran class, was not tipped among the favourites to win when the 11th edition of this classic race that started in Saint Malo on Sunday, November 4th.

But just as 62-year-old veteran Francis Joyon defied the odds to conclude a thrilling outright race win on Sunday night in the ULTIME class, so Tripon brought his Multi50 safely across the finish line to a well-earned victory. He finished three days, 17 hours and 10 minutes after Joyon crossed the finish line on IDEC Sport.

A proven all-rounder, this is Tripon's second transatlantic race win and comes 15 years after his victory in the 2003 Mini Transat, the entry-level solo ocean racing championship, sailed in 6.5-metre prototypes.

"This is my second transatlantic victory but this is one is about maturity," said Tripon. "Fifteen years after the Mini Transat, this is about a project delivered by a great team. With Réauté Chocolat we set ourselves a two-year project for the Route du Rhum and here we are, reaching that goal. It's fabulous. Now it is time to celebrate."

With stormy conditions in the Bay of Biscay and North Atlantic during the first few days of the race, Tripon profited from a prudent, safety-first strategy in the first half of the course when he stayed more south and east than his rivals and so avoided the worst of a malicious Atlantic depression which caused multiple problems among the 123-strong fleet.

"The key, I think, was sneaking a little passage through the front better than the others,” he said, explaining that he sailed 500 miles to the east of the leaders. But the stress remained until the finish line. "I had a few frights, believe me,” he continued.

“Two nights ago it was so squally - that was the worst night of the race. And then last night you are just afraid something will break so close to the finish. Scares? I had lots. I remember one night when the boat was heeling and heeling I could not dump the mainsail because the sheet was jammed."

While all four of the top-placed skippers in the early running in the class made stops, Tripon managed to complete the course non-stop. He came close to the Portuguese coast at one stage but headed back out to sea and then sailed a lonely race in the trade winds hundreds of miles to the south of his rivals

He was well-positioned to profit when the two leaders of the six strong division, Thibault Vauchel-Camus (Solidaires en Peloton-ARSEP) and Erwan Le Roux (FenêtréA-Mix Buffet), both had to make pit-stops in the Azores to make repairs.

By the time they resumed, Tripon was well ahead and he remained unchallenged through the last six-and-a-half days of racing. He was well out in front when Lalou Roucayrol capsized his Multi50, Arkema, early yesterday morning about 1,000 miles from the finish.

Over the years Tripon has proven his versatility, moving through sailing's solo and short-handed classes, from the Mini to seven barren years in the Solitaire du Figaro fleet, to Class40 and then IMOCA. He finished fourth in the last Route du Rhum-Destination Guadeloupe in the IMOCA class on Humble Heroes.

But his victory today is an excellent stepping-stone for him as he heads back into the IMOCA class. The Frenchman has a brand new 60-footer in build, designed by Sam Manuard and backed by a major sponsor. Now he is looking to take this success up to the next level, racing solo non-stop around-the-world in the 2020 Vendée Globe.

The next finisher in the race is expected to be Britain’s Alex Thomson on Hugo Boss who is on course to win the IMOCA class. He is now less than 140 miles from the line. Behind him Erwan Le Roux is set to be the runner-up in the Multi50s behind Tripon and has just over 200 miles to go. 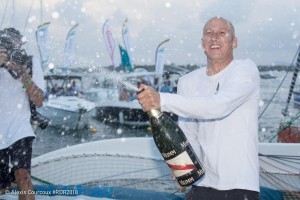 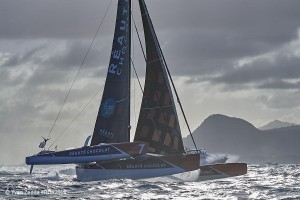 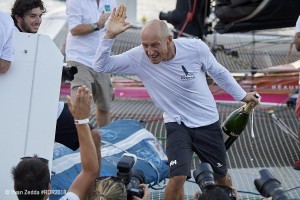 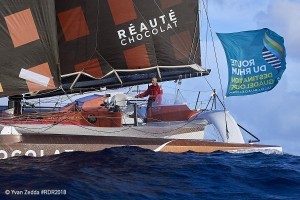 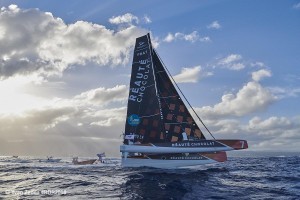