French sailing legend Loïck Peyron today finished the 3,542-nautical mile Route du Rhum-Destination Guadeloupe solo transatlantic race from Saint Malo in Brittany to Pointe-à-Pitre in Guadeloupe.
At the helm of the bright yellow Happy, 59-year-old Peyron completed the singlehanded race in 21 days, 3 hours and 57 minutes, finishing fourth in the Rhum Multi class. Happy is a sistership of the small trimaran sailed by Canadian yachtsman Mike Birch when he won the inaugural Route du Rhum in 1978 after 23 days of racing.
Four years ago in this race Peyron set a new outright record of seven days and 15 hours on the maxi trimaran Banque Populaire.

A record-breaking 123 skippers set sail from Saint Malo on November 4 with many, including Peyron, taking the prudent decision to seek shelter from the boat-breaking conditions in the opening days.

On a perfect sunny Sunday afternoon off Pointe-à-Pitre, the French sailing hero Loïck Peyron completed his personal tribute to transatlantic racing pioneers Mike Birch and Eric Tabarly when he brought his small yellow trimaran, Happy, through the finish line of the Route du Rhum-Destination Guadeloupe.

Forty years after Canadian Birch ignited the legend of the Route du Rhum when he won the inaugural race by just 98 seconds on the 12-metre yellow trimaran, Olympus, Peyron sailed his 37-year-old Olympus sistership, Happy, through the finish line to huge applause.

“It is perfect timing, coming in on a Sunday afternoon just after church. It is meant to be. What more could you want?” quipped 58-year-old Peyron who took fourth in the Multi Rhum class at the end of one of the most brutal transatlantics of recent years.

His time for the 3,542-nautical mile course was 21 days, three hours and 57 minutes which was well inside Birch’s 23-day effort in 1978, although Peyron was quick to point out that his time is not a record.

“Don’t forget she is for sale now,” Peyron told the crowds who lined the pontoons and breakwaters at Pointe-à-Pitre’s Memorial ACTe finish village.

“It was long and a bit tougher than I expected. I am glad it is over. That is the problem with small boats - you have to cross so many weather systems. I think I crossed five or six low pressure systems. But that is fine, that is for the memories. The thing is these small boats are so marvellous but really bouncy all the time, uncomfortable when you are racing with an alloy mast and dacron sails.”

After 51 transatlantic passages since his first Mini Transat in 1979, Peyron sought to return to the simplicity and purity of sailing like the founders of the sport of solo ocean racing, men like Tabarly and Birch. Peyron remembers berthing alongside Birch’s boat as a 22-year-old in Pointe-à-Pitre after his first Route du Rhum. He still calls Birch his ‘Jedi Master’.

“My story over the last four years is to try to give a tribute to those guys like Mike Birch and Tabarly, the pioneers - Tabarly in the OSTAR and Mike Birch here in the Rhum. So I feel I have done that,” said a smiling Peyron. “The good thing is that I know there are not so many people who could do this, and be able to start this race as the winner of the last edition.”

Peyron’s back-to-basics approach meant no modern electronic aids on Happy, no routing software, no GPS, navigating by sextant and using traditional dacron sails with no furling gear to roll up the sails, and next to no communication with the outside world.

The brutal wind and sea conditions in the Bay of Biscay during the first few days meant Peyron chose to use modern 4G technology to download two sets of weather files to guarantee his safety. Even so he spent 40 or so hours sheltering along the north Spanish coast, trying to avoid the worst of the weather which buffeted the fleet. “I went out too early, it was super bad weather. I was seeing a good 50 knots and a big sea state because Finisterre is not the right place to be,” Peyron recalled.

He admits to pushing the little trimaran hard over recent days, seeking to break away from near-identical sistership Friends & Lovers, sailed by 36-year-old French businessman Jean-François Corre and trying to catch Jean-Pierre Balmes on Solveo Energie Nouvelle. He passed Balmes during last night to take fourth while Friends & Lovers was some 25 miles behind when Peyron finished.

The diminutive Frenchman is adamant that this was his last Rhum. “I am done. I have done eight and that is plenty,” he said. “The next challenge is a real one in La Solitaire in the new Figaro Beneteau 3; I have started each of the different iterations and I am looking forward to the new 3.” 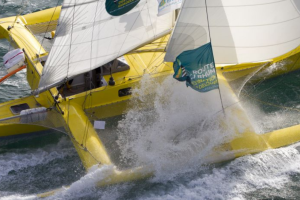 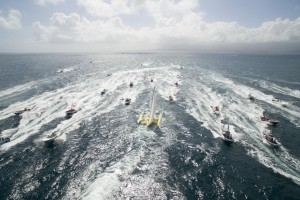 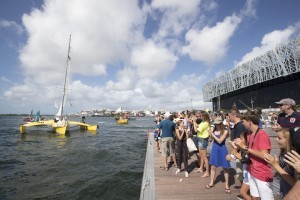 New Otam 80HT in build for delivery in spring 2020