A glittering prize-giving ceremony on Friday at the Salon Nautic, the annual boat show in Paris, honoured the top performances across all the classes.

The 40th anniversary Route du Rhum-Destination Guadeloupe proved to be a memorable edition, with big crowds turning out in Saint Malo to see the record fleet of 123 boats in six divisions start the 3,542-nautical mile race to Pointe-à-Pitre.

Huge numbers around the world followed the solo transatlantic race on the internet and on social media, enthralled by the suspense of close finishes, unexpected drama, record-breaking passages in four of the six divisions, and a brutal passage across the Bay of Biscay.

A glittering prize-giving ceremony on Friday at the Salon Nautic, the annual boat show in Paris, honoured the top performances across all the classes.

During the 12 days before the start in Saint Malo the 50,000m2 race village, where more than two kms of docks were lined with race boats, welcomed more than 1.35 million visitors, a 50% increase on 2014. 2 million people are thought to have visited the city in total to enjoy the race atmosphere and national holiday.

This figure does not include the thousands of people who turned out to see the start on Sunday November 4th in a perfect 12-15 knots of south-southeasterly breeze and pleasant autumn sunshine.

The official race website had more than 2.5 million unique visitors accounting for 35 million page views, while the race mobile app was downloaded 240,000 times. The social media community more than doubled in size compared to the previous edition in 2014 with 188,500 subscribers, and 175,000 hours of video views.

The general public and dedicated race fans alike were now able to follow a race that offered many twists and turns in each of the classes. More than 15,000 people were on the water for the start while two million viewers watched the action live on France 3 television, France O and TV5 Monde.

The Route du Rhum-Destination Guadeloupe remains an alluring challenge. The solo skippers had a tough opening passage across the Bay of Biscay in stormy conditions. About 30 skippers chose to be prudent and took shelter in havens on the French and Spanish coasts, riding out gales that blew for most of the first week,

The big seas contributed to damage on four of the six ULTIME multihulls. Thomas Coville's trimaran (Sodebo Ultim') suffered cracking in a forward beam; Sébastien Josse’s Maxi Edmond de Rothschild lost the bow of one of its floats and Armel Le Cléac’h capsized off the Azores on Maxi Solo Banque Populaire IX.

In the IMOCA fleet British sailor Samantha Davies discovered structural damage on Initiatives Coeur and had to retire, the Franco-German sailor Isabelle Joschke was dismasted on Monin, as was the Class40 skipper Sam Goodchild on Narcos Mexico.

An incredible pace was maintained among the remaining ULTIME multihulls which led the fleet. Francis Joyon (IDEC Sport) clung tenaciously to the wake of François Gabart on MACIF until the finish.

And as the duo tussled during the last miles around Guadeloupe, it proved to be the 62-year-old Joyon who prevailed on his sixth appearance in the Route du Rhum-Destination Guadeloupe. He won by just seven minutes and eight seconds in a new record time of seven days, 14 hours and 21 minutes.

After dominating the IMOCA class race, meanwhile, leading by over 200 miles and on course for his first ever big solo win, British IMOCA racer Alex Thomson (Hugo Boss) slept through his alarms and struck the rocks as he approached the north of Guadeloupe.

Because Thomson used his engine to get off the rocks, he was given a penalty of 24 hours by the International Jury. This handed the win to France’s Paul Meilhat who was nevertheless a deserving winner on the non-foiling SMA.

There were big wins too in the Multi Rhum class where Pierre Antoine (Olmix) triumphed even after being diverted to assist Lalou Roucayrol, the Multi50 class skipper who capsized on Arkema 1,000 miles east of Guadeloupe.

And as he signed off from ocean racing before pursuing a new career in business, Sidney Gavignet (Café Joyeux) won the Rhum Mono division.

More than 40 companies and organisations supported this 11th edition of the Route du Rhum-Destination Guadeloupe. The Brittany Region and the city of Saint-Malo ensured the welcome at the start, for sailors and visitors was magnificent.

But so too was the welcome at the finish at Pointe-à-Pitre in Guadeloupe which greeted 81 finishers around the ACTe Memorial as well as the villages of Basse-Terre and the Marina du Bas du Fort. The race’s classic course is confirmed for at least the next two editions.

Alongside the usual major trophies there were new awards, such as the Cape Frehel Trophy Banque Populaire Grand Ouest, the Trophée 24 hours Brittany Ferries, the record of the CCI Basse-Terre and the Suzuki Combativity Awards.

All these prizes were presented to the sailors at the awards ceremony in Paris on Friday as well as the new Image Award for the most beautiful photo and the best video from more than 300 sequences that were entered by the solo sailors.

The selection of the winners was made possible thanks to a public choice with more than 11,000 people voting during the last six days as well votes cast by the media partners of the race.

Finally, with 1,300 accredited journalists, an increase of 62% over four years ago, the media coverage of the event reflected the huge public interest in the event.

Initial figures up until the closing of the finish line on December 7 give media benefits (excluding web) estimated at €69 million, comparing favourably with €44 million in 2014, and a total reach including the 16,000 web stories, valued at €114 million.

A complete analysis will be carried out in the weeks to come but already there is evidence of significant growth since 2014. 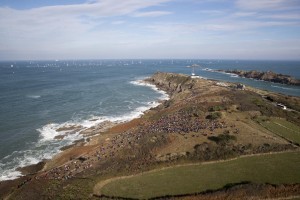 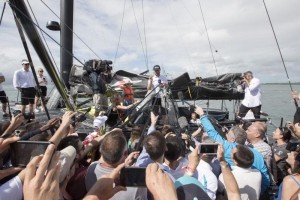 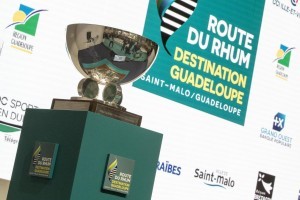 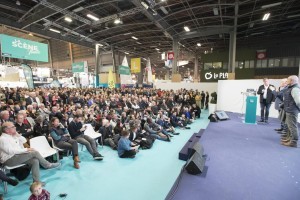 Spinlock enhances safety at sea with the introduction of GlowSpot