On course for record entry in 50th Rolex Fastnet Race

The Royal Ocean Racing Club’s new race entry system has been burning red hot since 1200 UTC today when registration opened for the 50th edition of the club’s flagship event, the Rolex Fastnet Race.

By 1300 entries were up to 433, with 300 signing up via the RORC’s new SailRaceHQ entry system in the first ten minutes and 400 within 30 minutes (a similar number took more than an hour to register prior to the last edition in 2021).

Given that the record number of boats on the start line of what is certainly the ‘world’s largest offshore yacht race’ peaked at 388 in pre-pandemic 2019, this is promising sign that the fleet size will reach a new record when it departs the Solent on Saturday, 22 July this summer, bound for the Fastnet Rock and then on to the finish in Cherbourg-en-Cotentin. This is especially likely given that today’s figures will be by no means the final entry size: RORC members not only receive priority entry but still have until 25 January to sign up; competitors in the RORC’s new Roschier Baltic Sea Race last year, and as well those en route to Grenada in the current RORC Transatlantic Race, get guaranteed entry. But the largest group still to register are the ‘pro’ classes racing outside of the IRC fleet, ie the Ultim, IMOCA; Ocean 50; Class40 and Figaro 3, as well as the multihull classes. They have until 14 April to register. For many of this latter group, the Rolex Fastnet Race will be one of the few races they will get to compete in during this season prior to the start of the autumn’s Transat Jacques Vabre. 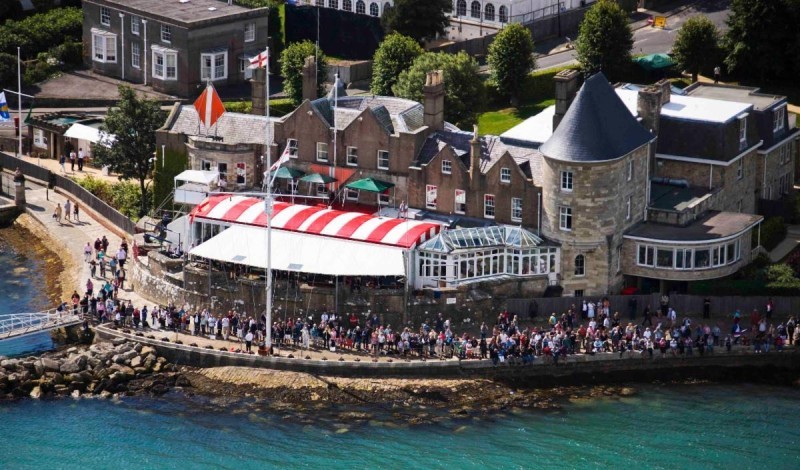 First to burst through the door in the RORC’s equivalent of the Harrod’s Sale, entering as the clock struck 1200, was Rolex Fastnet Race regular, Chris Choules and his faithful With Alacrity (GBR), top Sigma 38 in the race’s last three editions and fourth of 70 boats in IRC 4 in 2021. Neck and neck with them, though from the opposite side of the Channel, was another regular in Guy Sallenave’s X-442 Ster Wenn 5 (FRA). Second in IRC 1 in the 2005 Rolex Fastnet Race, Ster Wenn 5 was campaigned by Sallenave’s son Pierre in 2021, who has entered her again for this special half century edition.

By 1300 today, as usual the biggest contingent among those registered was from the UK with 166 signed up, followed by France with 118. Yachts ranged in size from a 6.5m Classe Mini to several at 9m, to Lucky, the former Rambler 88, American George David’s serial monohull line honours winner, now in the hands of Bryon Ehrhart. The longest was the first Ultim entry, the 30m trimaran Banque Populaire skippered by 2016-17 Vendée Globe winner Armel le Cleac’h.

“We’re delighted by the response. It’s especially good to see so many old friends and regular participants who seem to be making an extra effort to join us for the special 50th edition Rolex Fastnet Race,” said the RORC’s newly appointed Racing Manager and Race Director Steve Cole.

“Obviously from here, yachts still need to qualify and log the required number of race miles. But it seems highly likely that when the remaining RORC members and the pro classes have signed up by April, we will top 500 boats which should translate into a record turn-out come start day in July.”

The RORC Race Team in Cowes is currently processing the entries, but a preliminary look at the line-up shows especially large turn-outs from manufacturer classes such as the Jeanneau Sun Fast 3300 and 3600, plus various JPKs, including 10.10s, 10.80s and 11.80s that have won three of the race’s last five editions overall under IRC corrected time.