International sailors from the Volvo Ocean Race put aside their competition and joined Kiwi school children and locals in cleaning up one of New Zealand’s most popular beaches this weekend.

Takapuna Beach was selected for the environmental initiative after concerned locals voted it as the Auckland waterfront most in need of help.

Vestas 11th Hour Racing was joined by sailors from team AkzoNobel, Turn the Tide on Plastic and Team Brunel as they removed over 50kg of discarded plastic pollution from the North Shore beach front.

Volvo Cars NZ GM Coby Duggan, who organised the clean up event with the support of local environmental protection charities Sustainable Coastlines and Sea Cleaners, says they are committed to helping reduce the amount of plastic in our oceans.

“Today, sailors from around the world joined Kiwis in making a symbolic stand against plastic pollution in our seas. Analysis of scientific data gathered during the ocean race has shown measurable levels of microplastics have already been found in the waters around Antarctica and off the coast of Australia.

There is every reason to believe our own waters also have levels of plastic particles which are impacting the fish and birds which live there. It is our hope that New Zealanders will see we also have a part to play in protecting our marine environment to prevent an catastrophe which will have far reaching consequences on the generations to come,” he says.

Duggan says in addition to bringing together sailors and locals this weekend, the car maker has donated €300,000 to support a new environmental science initiative which equipped two boats in the Volvo Ocean Race – Turn the Tide on Plastic and team AkzoNobel – with sensors to gather climate change data and the level of micro plastic pollution in seawater around New Zealand and other parts of the globe.

“While in New Zealand, the number of vessels fitted with these sensors will be expanded - allowing more of the much needed, scientific data to be collected in our waters as the boats head out later this month towards Brazil,” he says.

Duggan says scientists believe the data they can collect from Auckland to Brazil could reveal further insights as localised gyres or systems of currents in the region result in higher concentrations of plastics.

Vestas 11th Hour Racing team director Mark Towill says while the teams compete on the water, they are are committed to making a difference in each stopover.

"Last week, we were battling it out on the water in the In-Port Race but today we have united to keep our oceans clean," he says.

Duggan says the company has also begun to integrate learnings from their environmental initiatives into their manufacturing processes.

“In addition to our financial support for this programme, we are always looking at ways to introduce more environmentally sustainable design elements into our vehicles - and have even gone as far as making floor mats from nylon fishing nets reclaimed from the sea for one of our new models,” he says.

Water samples gathered from sensors on ocean race boats enroute to New Zealand is currently being analysed and will be provided to scientists at the National Oceanic and Atmospheric Administration (NOAA) programme - a US environmental agency which focuses on the conditions of the oceans and atmosphere. 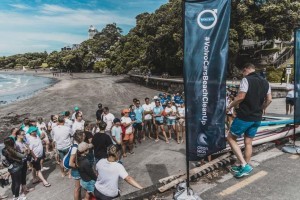 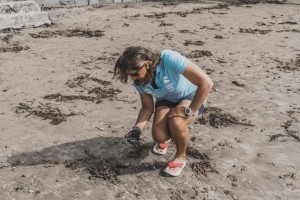 Fincantieri will cooperate with Barzan Holdings'