The Southern Ocean is beginning to exact a toll on the Volvo Ocean Race fleet as conditions intensify this weekend.

The wind is consistently above 30 knots now, with gusts approaching 40 knots and the sea state is rising above 5 metres.

MAPFRE, who had been leading at 0700 UTC on Saturday morning, has subsequently reported damage to its mast, which has slowed the team somewhat but the team is still holding firm in second place.

“We have some small damage to the mast track,” wrote skipper Xabi Fernández in an email to Race Control on Saturday morning. “We have made a temporary fix and will continue racing.”

Navigator Juan Vila added: “The focus on board is to ensure we protect our boat and equipment. We had a small break in the mast track and now we have to balance pushing hard but knowing when to take our foot off the accelerator.”

SHK/Scallywag, already trailing the fleet by 100 miles this morning, reported damage to a runner block, one of the pulleys guiding the rigging that supports the mast. It was quickly repaired and while the team lost some miles, no lasting damage was done.

“We were gybing along the Ice Exclusion Zone and the runner block (pulley) twisted upside down, so when we brought the new runner on it broke the block and stripped the runner tail,” explained skipper David Witt.

“We were lucky; we could have snapped the runner and lost the mast. So we had to jury rig a fix, put it back together and now we’re off and going again. We’re 110 miles behind, but that’s what happens.”

The teams are making fast progress towards Cape Horn, pushed onwards by the gale force westerly winds behind them. Gybing along the southern boundary of the race course of the Ice Exclusion Zone, is making for exhausting work.

“There’s 35 to 40 knots of breeze and big waves,” said Brunel skipper Bouwe Bekking, the eight-time race veteran. “On the one hand the sailing is really fun but on the other hand it’s pretty hairy because you know if you do something wrong it can go terribly wrong. So it’s always to find the balance.”

One team blazing along this weekend is Turn the Tide on Plastic. With Southern Ocean veterans like skipper Dee Caffari and navigator Brian Thompson leading the way, the team has worked its way to the head of the leaderboard at 1300 UTC, racing along at nearly 22 knots – the fastest in the fleet.

“Sending it under water most of the time! Gybe ho! Again and again. A busy day in lots of wind down here,” tweeted Caffari earlier.
The work is only just beginning. 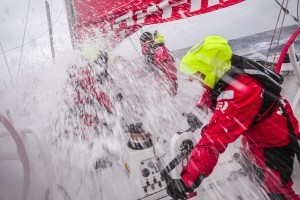 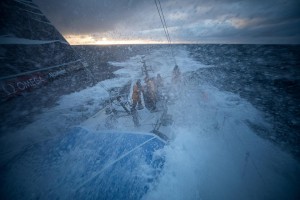 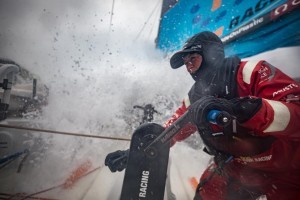 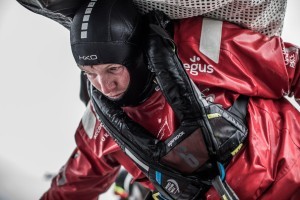