Leg 9, from Newport to Cardiff, day 2 on board Brunel. Louis Balcaen, Alberto Bolzan and Carlo Huisman on deck

The Volvo Ocean Race teams looked set to threaten the 24-hour distance record for the Volvo Ocean 65 class on Thursday after hooking onto a classic North Atlantic depression.

After a short respite from the wet and wild opening 48 hours of Leg 9, boat speeds were up to 30 knots as the east-moving low pressure system provided perfect conditions for blisteringly quick sailing.

Team Brunel led the charge east today as the three boats that opted to stay south – Brunel, team Akzonobel and Vestas 11th Hour Racing – enjoyed a jump on their rivals at the halfway stage of the leg.

While less than 20 miles split the top three teams, the trailing four teams of Dongfeng Race Team, Turn the Tide on Plastic, MAPFRE and Team Sun Hung Kai/Scallywag have slipped more than 50 miles back.

And for now there will be little opportunity to make up missing miles as the teams focus purely on out-and-out speed as they skirt the northern ice exclusion zone.

The ideal conditions are set to continue for another 24 hours or so – and Brunel helmsman Pete Burling thinks the 24-hour distance record could tumble in that time.

In order to beat the current record of 550.8 nautical miles, set by Ian Walker’s 2014-15 winners Abu Dhabi Ocean Racing on the approach to Cape Horn, a team would have to average just under 23 knots over a 24-hour period.

At 1300 UTC, Brunel had clocked up 540.1 nautical miles in the previous 24 hours, a mark that looked set to improve further yet.

“There's a big low forming to the west of us which is giving us some nice downwind conditions,” said Burling, whose Brunel won the OMEGA 24 Hour Speed Record Challenge for Leg 8. “There's a good chance of the 24-hour speed run for the whole race over the next couple of days.

“We were just discussing the plan for the next two days. We can talk about this for hours, but we just need to sail quicker than the others for that period of time, and hopefully get to the light patch before them.”

The teams will have to make the most of the high speed sailing while it lasts, as lying 1,000 miles ahead of them is a huge high pressure ridge that will bring them to a standstill.

It is likely to result in a compression of the fleet – and a restart just 500 miles from the finish line in Cardiff, Wales.

“Our biggest concern is probably the same as everyone else - that in a few days’ time we will go from the quickest portion of the race to something pretty slow where we will be able to see everyone else again,” Burling added. “Everything we fight for here will probably just turn into a mile or so when we come to that final stage.”

Onboard fifth-placed Turn the Tide on Plastic, Dee Caffari said her crew was content to rack up the miles and wait for an opportunity to claw back positions closer to the finish.

“The boat is happy and the sailors are happy to enjoy this fast ride while we have the conditions for it,” she said. “Making it count while we have wind as they are aware that after Saturday lunchtime the pace will slow considerably and life on board will go to another extreme. Looking ahead we have a difficult approach and finish into Cardiff...” 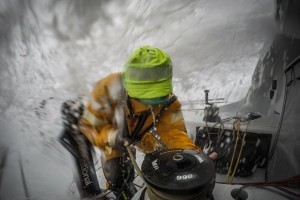 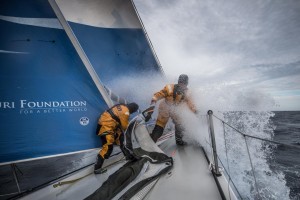 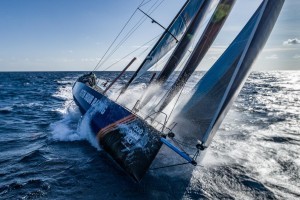