But it was Xabi Fernández’s MAPFRE team who rode a third place finish on Sunday to win the overall In-Port Race Series, sailing 11 points clear of their closest pursuers, Dongfeng Race Team.

With one In-Port Race left in The Hague, MAPFRE can now not be overtaken on the leaderboard.

“It’s a box ticked for us and we’re very happy with it,” Fernández said. “Today is a good day for us. We were planning to sail our own race, but in the start we saw it wasn’t going well for us so we decided to hold up Dongfeng and try to finish the series now.”

Conditions were ideal for racing on Sunday, with winds in the 14 to 17 knot range, the southerly direction producing a reaching race course at the start. A wind shift turned the course into a true upwind/downwind for the last third of the race.

Team Brunel won the start with a fantastic time on distance run, hitting the line with speed and fully powered up.

Meanwhile, MAPFRE, with an eye on the leaderboard, stayed close to Dongfeng Race Team, luffing them up early and holding them back, the pair trailing the entire fleet early.

At the first mark, both tried to bully their way past Turn the Tide on Plastic, squeezing inside at the turn.

But while MAPFRE made a clean pass, Dongfeng Race Team didn’t have rights to push inside and received a penalty from the on-water Umpires, knocking them back behind the fleet.

At the front of the race, Team Brunel was trying desperately to hold on to its early lead, but a poor choice in sail selection meant the team was underpowered on the downwind leg and dropped all the way back from first to sixth.

Vestas 11th Hour Racing and team AkzoNobel were best placed to take advantage of the error and grabbed the leading two positions for the last lap of the course, with Charlie Enright’s team taking the win.

“We got off the start line okay and gave ourselves a chance,” Enright said. “On a day like today you’re never going to get it right 100% of the time, but the team that gets it right the most, wins. We’re happy with the result. Every time the start gun goes off it’s a chance to prove ourselves.”

The second place finish for Simeon Tienpont’s AkzoNobel team moves his crew into a podium position for the series, just two points ahead of Team Brunel.

A fourth place finish on Sunday allowed Dee Caffari’s Turn the Tide on Plastic to close the gap with David Witt’s SHK/Scallywag to three points heading into the final race in The Hague on June 30.

On Thursday June 21 the final leg of the Volvo Ocean Race from Gothenburg to The Hague will start at 1400 local time (1200 UTC) with the top three teams on the leaderboard in a dead heat.

“We’re already thinking about it,” Fernández admitted. “We knew it would be close but I don’t think anyone thought it would be three boats and whoever wins the leg, wins the race!”

The race for the title is between MAPFRE, Team Brunel and Dongfeng Race Team. Whoever among them finishes the leg to The Hague ahead of the others, will win the Volvo Ocean Race 2017-18.

It marks the closest finish in the 45-year history of the race.

Tune in for live coverage of Leg 11 at www.volvooceanrace.com and on social media @volvooceanrace beginning at 1345 local time (1145 UTC) on June 21.

* One additional point will be awarded to the team with the best elapsed time at the conclusion of the race in The Hague. Currently, Dongfeng would win this point.
** Should there be a tie on the overall race leaderboard at the end of the offshore legs, the In-Port Race Series standings will be used to break the tie. 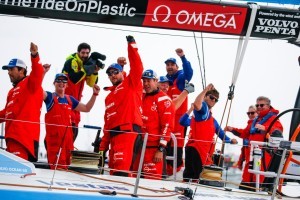 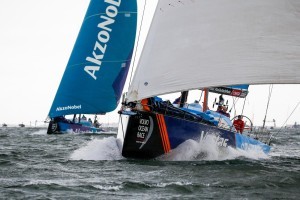 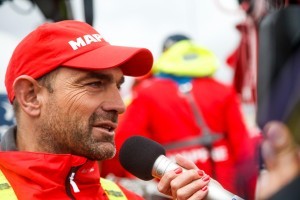