Ferretti group, protagonist of the Monaco Yacht Show, reveals the projects of the Super Yacht Yard

Ferretti Group exhibits in the Principality of Monaco its fleet of yachts between 30 and 50 meters for the Riva, Custom Line and CRN brands and presents the new full custom projects expected for the coming years. Monte Carlo, September 26th 2018 – Latona 50, the new powerful and dynamic masterpiece by CRN, is the star of Ferretti Group's fantastic fleet at the 28th edition of the Monaco Yacht Show. The fleet is completed by three models of incomparable beauty: the semi-displacement Custom Line Navetta 42, the planing Custom Line 120', and the Riva 110' Dolcevita flybridge.

During the press conference that took place in the morning of the opening of the show, Alberto Galassi, CEO of Ferretti Group, revealed, together with the Chief Commercial Officer Stefano de Vivo, the investments in the super and mega yacht sector, the new projects of the upcoming flagships and the new Riva, Pershing and CRN mega yachts currently under construction.

“Now more than ever, success belongs to those who move fast, in the direction of the market and today the market looks with increasing interest to large yachts. It is precisely in the segment of pleasure yachts, that we are investing capital, resources, and all our know-how to consolidate ourselves as a worldwide reference point for excellence and design” declared Alberto Galassi. "The numbers are proving us right and convince us that pursuing beauty means conquering the market”.

The super yachts occupy an increasingly important place in the Group's plans: in the next three-year period 2019-2021, there will be 13 new projects over 30 meters compared to the 8 presented in the previous three years and 66 new boats in the segment of super and maxi yachts.

There are currently 5 new pleasure yachts under construction at the Ancona shipyard, ready to be launched in 2019: the two units of Pershing 140, the Riva 50 meters, the largest boats ever built by the respective brands, the CRN 137 of 62 meters and the CRN 135 of 79 meters.

The investments, which have always been the cornerstone of Ferretti Group's growth strategy, increased to 153.5 million euros in the 2015-2018 four-year period, of which about 30% allocated to the design and development of yachts over the 30 meters.

The Group chose the Monaco Yacht Show, scheduled from September 26th to 29th, for the world debut of the new CRN flagship. Launched last February and delivered in May, Latona 50 meters is projected by CRN’s Engineering and Interiors&Design Departments in collaboration with Zuccon International Project.

For this edition of the Monaco Yacht Show, Ferretti Group was flanked as always by prestigious luxury brands: Culti, whose enchanting essences seduced guests, journalists and ship owners; Dolce & Gabbana, longtime partner with the Ferretti Group for uniforms; Frette, that signed the luxurious linens of the Custom Line models; Sabrina Montecarlo, provided the precious furnishing accessories of Riva and Custom Line yachts; Zimmer+Rohde, supplier of high-end, modern and innovatively designed fabrics; La Scolca delighted visitors with its selection of wines; Samsonite provided business luggage to the Ferretti Group staff; Seabob was once again present with the limited edition seatoys made specifically for the Group's brands; Slam, was the official supplier of Ferretti Group crew uniforms; Emirates Airlines offered advantageous airfares.

Ferretti Group is present with two stands and four yachts on display: 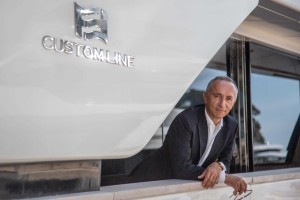 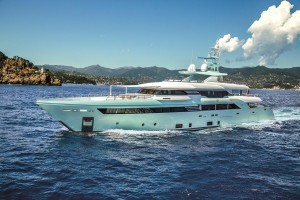 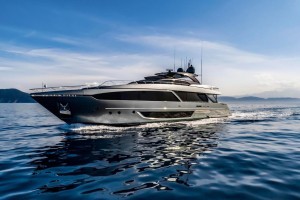