New lancio, Fincantieri: Genoa has its own ship-bridge

New launch, Fincantieri: Genoa has its own ship-bridge

Genoa, April 28, 2020 — Today, Genoa has its ship-bridge. PM Giuseppe Conte, the Minister of Infrastructure and Transport, Paola De Micheli, the Governor of the Liguria Region, Giovanni Toti, and the Mayor of Genoa and Commissioner for Reconstruction, Marco Bucci, attended the raising of the last steel span. With this last raising, the viaduct over the Polcevera stream, designed by Renzo Piano, whose construction and design was entrusted to Fincantieri Infrastructure of the Fincantieri Group and Salini Impregilo, reaches 1067 metres, the length of the entire structure that soberly stands out on the city skyline, like the hull of a ship.

A “large white vessel crossing the valley,” “The Bridge,” as Mr Piano renamed it — just like a ship —was built thanks to impressive know-how of Fincantieri, a leading shipbuilding group. 17,400 tons of steel were used for the construction of the Bridge, forged in the Fincantieri plants all over Italy thanks to the work of more than 800 people, and assembled and welded in the construction site thanks to the commitment of Fincantieri Infrastructure specialized engineers and technicians — up to 350 units per day at peak production times. It took 19 raising operations, 3 of which were special ones, to raise the 100-metre long maxi-spas that crossed the Polcevera stream and the railway to a height of over 40 metres. These operations lasted, in the case of special raising operation, up to 48 hours and required important preparatory activities with teams of over 50 people at work and the use of special machinery — such as the maxi-cranes and strand jacks, equipment necessary to raise decks exceeding 1800 tons in weight.

Today, therefore, the raising of the span between Piers 11 and 12 completes the load-bearing structure of the new viaduct. A process which began with the cutting of the first metal sheet on March 11, 2019, at the Fincantieri Infrastructure plant in Valeggio sul Mincio and which, since the raising of the first deck on October 1, 2019, has involved 7 months of uninterrupted work to lift all the spans that make up the new bridge. Now the structure will be completed with the last casings, after which it will be lowered onto the final supports.

The next appointment, after the coating activities, will be the one with the technologies developed by Seastema and Cetena — also owned by Fincantieri Group: the bridge will be equipped with special sensors that will make the Genoa viaduct the first “smart bridge” in Europe.

A commitment that took place in record time, never experienced before and that today gives back to Genoa and the country a neuralgic infrastructure destined to become a reference point for similar works. With what has been called the “Genoa bridge miracle,” tight work pace and very high quality standards, Italy has shown the rest of the world that it has the industrial and management skills to build well, safely and on time. This is a standard — and not an exception — for Fincantieri’s production model, organized to produce all its ships on time and on budget.

“In March last year we started the production of segments in our plant in Valeggio sul Mincio,” Giuseppe Bono, CEO of Fincantieri, has recalled, “and we were already expecting to be able to accelerate the time schedule: today’s result proves us right.
The trust placed in Fincantieri has been repaid and, as I promised, with its skills it was able to manage such a complex work in record time. Because, when we Italians want to, we know how to roll up our sleeves and do great things.
Of course, we would never have thought that we would have been forced to face a pandemic capable of blocking the productive activities of our country and the whole world: once again, my thanks go to our men, who have worked tirelessly over the last few months.
The Genoa model,” Giuseppe Bono has added, “praised and invoked by many in these days, is our model for the future of the country. Fincantieri will in fact continue to make its expertise and resources available to contribute, alongside the institutions, to the creation of a new model of national economic development.” 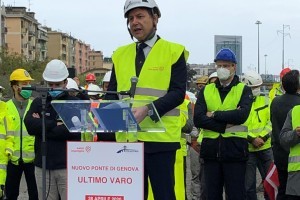 Multipurpose DutchCraft 56 takes diving to the next level

52 Super Series fleet is on the move and heading home