World debut for the GT 320 Atelier at Boot Düsseldorf 2020

Invictus Yacht unveils at Boot Düsseldorf 2020 the new GT 320 Atelier, a special version of one the most iconic Invictus models - the Owner requested an elegant and unusual combination of colours. The shiny black hull and the Personal White sides are in chromatic contrast, like the “Eclipse” cockpit, with black and cream coloured leatherette and backrests in ivory fabric, creating a natural linen effect.

The reverse bow - one of the distinguishing features of T range - has been further adjusted to deliver a deeper sense of elegance. This feature is emphasized by the oval-section handrail, running on the entire length of the boat, from the upper side down to the stern platform.

The deck layout includes access to the cockpit via the stern platform, walking left of the large sundeck, which can be further expanded by transforming the fore sofa. In the middle of the cockpit, the L-shaped dinette features a table and faces a real “outdoor kitchen” (with fridge, ice maker, grill and basin), all neatly tucked into a stand-up cabinet that - in perfect Invictus style - can elegantly conceal all the equipment behind doors.

Among the Invictus 320 GT optionals, the carbon hardtop stands out - it can be extended to provide more shade with a transpiring, ventilated fabric held in place by carbon rods.

The two armchairs for the pilot and co-pilot, with a bottle-holder between them, valorize the navigation bridge. At the bow, the large sundeck has headrests positioned on the deckhouse, creating relaxing areas that bring to mind a chaise-longue. This complex composition adds considerably to the bow area and includes sound diffusers and cup-holders.

On the Invictus 320 GT, attention to detail is combined with great performance. The shipyard has designed a broad range of sterndrive options (diesel or petrol, single or twin), up to 860 HP maximum.

The exceptional level of the finishings and the perfection of every detail, guaranteed by Invictus, are common features in all production models which are already available in many variations of colour, fitted devices and configurations. Owners therefore have plenty of choice and can configure their yacht to suit their needs and tastes. Additionally, the Atelier Invictus offers customers a network of specialized craftsmen and highly qualified suppliers. Customers are assisted from the early stages of purchase and guided through a true virtual laboratory, in which the vessel is designed with individual material inserts and equipment. This allows the customization of an industrially produced boat, thus expressing the owner’s personality, style and tastes.

Double German debut with the CX270 and GT280S

For the first time since their debut at the most recent Cannes Yachting Festival, the CX270 and GT280S are on display in this German boat show. The CX270 stands out because its interiors are much bigger compared to competitor vessels of the same size, yet they maintain a sporty profile thanks to the balance between the hull’s design and the profile of the deckhouse. There are no cumbersome external elements on the deck, as the designers have opted for a stowaway anchor. The Invictus CX270 has a sporty character, highlighted by the two outboard engines (220 hp each), which binds tightly with the great attention to details and solutions that aim at providing the greatest comfort aboard. The ergonomics typical of the CX series are highlighted by the careful design of the vertically developed wheelhouse.

Invictus GT280S is the outboard configuration of one of the Italian shipyard’s most successful models. With its two outboard motors totaling 500 hp, its performance is outstanding, a feature that adds to the typical reverse bow and great livability. 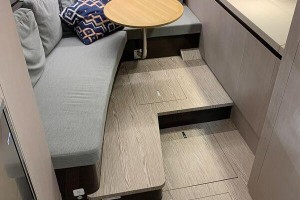 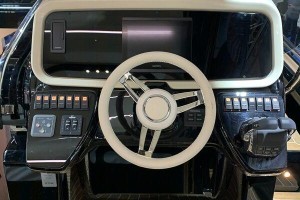 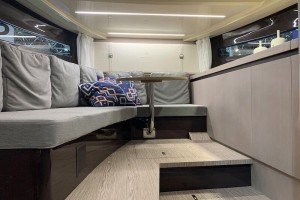 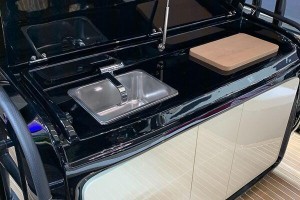 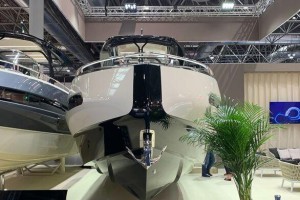 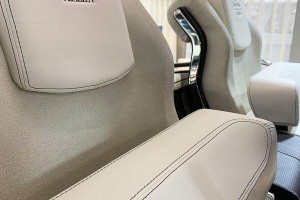 Hallberg-Rassy 40C will have its world premiere at Boot Düsseldorf