- More than 12 units are sold already

- Very easy to use and very low maintenance

Maritimo, leading Australian builder of bespoke luxury motor yachts, is excited to present the revolutionary X60, the very first model of the X-Series that encapsulates a very new concept in luxury sport yacht design. The boat has been unveiled in Australia with huge success and will be available in Europe soon.

“Maritimo fuses its performance pedigree, bespoke materials and innovative design to create unparalleled boating luxury”, said Craig Harvey, CEO at Spencer Ship, Maritimo’s international sales office based in Monaco.“With its innovative aft cabin, the X60 is a world first in its class. This reimagined motor yacht announces the new generation of Maritimo design and is an exciting prelude of things to come.The X60 has won international acclaim generating worldwide interest and sales. Forward orders now exceed one dozen.The response to this vessel internationally has been one of the best of any model we have introduced in our 15 year history".

Inherent in the X-Series bloodline will be the company’s race driven performance prowess. With a complete new efficient shaft-driven hull and driveline design, the X60 has been tested at speeds up to 34 knots with 925hp Scania power, with excess speed capability available with Volvo 1000hp power option.

Hull efficiency within the cruising speed range was a major focus of the state of the art hull and driveline design. The X60’s class leading range and economy has been recorded at over 30-knot cruise and consumption rate of under 100L/h per engine at 27-knot cruise.

With superior economy and greater fuel capacity than direct competitors, the X60’s range capabilities are revolutionary within the sport motor yacht segment.

With units already in production, bound for new homes in Australia, New Zealand, North America, and Europe, the early momentum in sales is credited to the value added into the design’s increased accommodation spaces to that of its competitors.  The first X60 has left Sydney mid-August bound for its new home in Auckland, New Zealand, in an epic 100-hour plus journey.

The X60 is one of the most versatile sports motor yachts available in the international market. Integral in X-Series design is the versatile aft cabin space that enables high levels of custom-ability for owners to cater to the space to their specific requirements. The space enables an additional cabin accessible from saloon and swim platform, which can be arranged as beach club, tender garage, euro galley and other custom options.

For example, in the Beach Club version the owner gets a spacious aft social space for entertaining as close to the water as possible. The Queen version allows using this space as an additional VIP cabin with a large bed and panoramic windows. The Regency Suite option means the guest area in the bow on the lower deck will comprise of just two cabins but with the enlarged master cabin. In addition, an owner may opt to use the aft space as a tender garage.

“The additional aft cabin is completely unique and is resonating with buyers within the sport motor yacht market. Its ability to add extra accommodation space that is similar in size to an additional master cabin in terms of volume, is clearly something special," Maritimo's lead designer Tom Barry-Cotter said.

Maritimo has also worked closely with Twin Disc in the development of marina maneuvering EJS joystick systems. The latest Twin Disc System has the most sensitive joystick docking ability in the industry, enabling stress free docking in tight spaces.

The X60 is fitted with Twin Disk Quickshift transmissions, EC 300 Electronic Control System, Express Joystick and has the option of being fitted with Express Positioning System technology, which enables precise and continuous position and heading hold.

The next model within the X-Series Range, a Maritimo X50, has already been launched and is going to be presented later.

The X60 is available through Maritimo’s international sales office - Spencer Ship Monaco. Based in Monaco, the company does take care of Maritimo's export department for Europe, Africa, Middle East and Asia.

The retail base price of the X60 will be around AUD 2.2 million (Approximately1.38 million euro subject to currency exchange) with an extra AUD 40,000 (25,000 euro) for either the beach club or aft queen cabin layout. 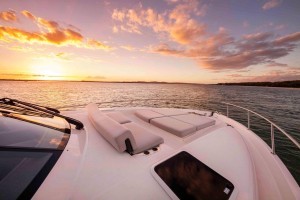 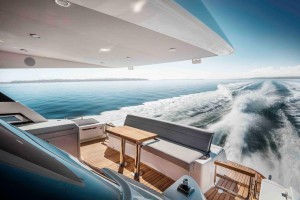 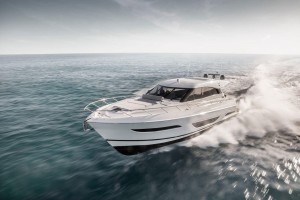 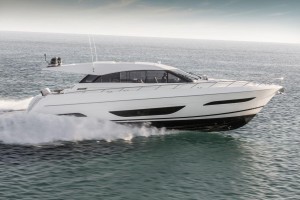 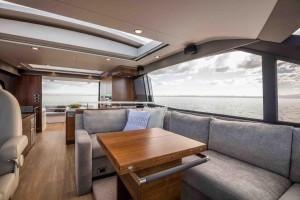 Wallywind110 sets the course for the new Wally cruiser-racer range

Be wowed by the all-new wallywhy150 with boosted exteriors