The 2022 Rolex Swan Cup signed-off in style on Sunday with deciding races across all the classes settling the final positions after a week of intense but friendly racing.

Teams competing in the four ClubSwan One-Design classes settled matters with two closely fought windward-leeward races, while the varied and diverse 56-strong fleet of Swans taking part in the Rating classes took on a long coastal race around the La Maddalena archipelago, taking in the islands of Santo Stefano, Caprera and La Maddalena itself.

The level of competition across all classes was self-evident, from the Maxi Rating class of 100ft-plus racers, through the one-design classes and all the way to the 22-strong Swan Grand Prix class and the Classic S&S division including the Swan 36 Josian, the smallest yacht taking part. 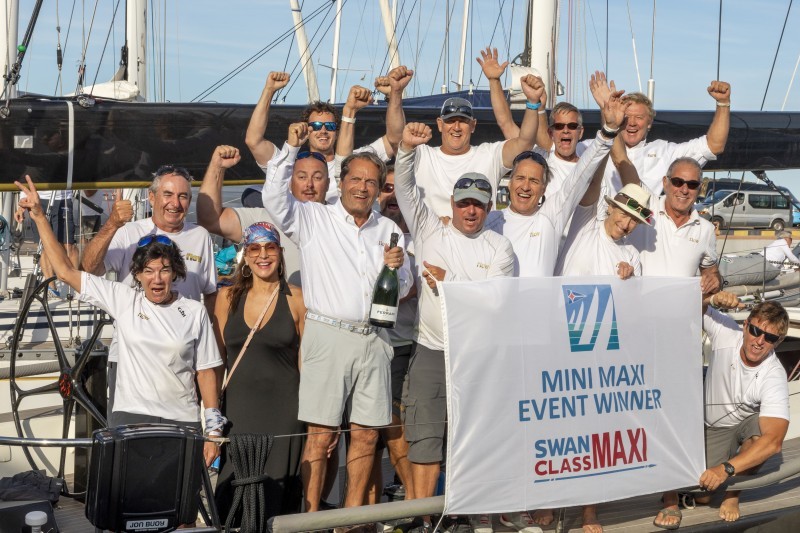 Among the 15 ClubSwan 50 contenders competition was fierce, with seven different winners in eight races.

At the end of the final race, in which they posted a highly untypical 12th place, Louis Balcaen's Balthasar was proudly on top of the table four points clear of August Schram's Stella Maris, who in turn pipped the double world champion Hatari by a single point.

A delighted Balcaen said: “It's a great feeling and I must thank the team because they are just incredible. We have so much fun on the boat and it's the perfect balance between performance and fun.

“Here, simply put, it's the best sailing in the world and we had great conditions, a little bit too much wind at times so we couldn't sail every day, but still we had four days of glamorous sailing.”

From the opening day the uber-competitive ClubSwan 36 class saw the Monaco flagged G Spot – helmed by owner Giangiacomo Serena – locked in an even duel with Lorenzo Mondo's Farstar.

Going into the deciding race tied on 14 points and well clear of the chasing pack, the finale turned into a match race, with G-Spot just edging the contest while Haakon Lorentzen's Mamao took her third win of the regatta to take the final podium place.

“It's the first Rolex Swan Cup that we have won, but it is also the first that I have participated in, so it has had a really big effect on my heart,” said Serena. “We have been together for seven years now and the crew is like a second family – they are great professionals becoming close friends of mine now.

“It was a close battle with Farstar but we are getting used to that. At the last regatta we were fighting until the last day against them, it's difficult to beat them because they are really good sailors.”

ClubSwan 42 Nadir makes it three in a row

As ever, the ClubSwan 42 class also showed enormous competitive spirit, with Pedro Vaquer's Nadir – winner at both Copa Del Rey and the Swan One Design Worlds – making it three in a row ahead of Massimo De Campo's Selene-Alifax and Pit Finis' Dralion.

“We enjoyed it very much,” said Vaquer. “We were last here in 2018 and we are very happy to be back. Our team has been great, we work well together, and this has been a dream season as we have won all the events we have been to.”

However it wasn't as clear cut as it looked said Terrieri: “It's wonderful to win here in Porto Cervo in amazing conditions. We did a lot of jobs during the year to improve the boat speed and we arrived here with some new tuning and new sails, and the upwind speed was the difference between us and the other boats.

“The crew worked very, very well, and if you look at the results it looks easy, but it was a tight competition – we were never running away and we were always under pressure. It was difficult, but we were consistent and maybe that was the difference in the end.”

The performance of yachts – including the ClubSwan 50s Hatari and Earlybird – helped Germany to the top of The Nations League 2022 table, repeating their success of last year. Italy again took second place, with Monaco completing the podium after edging out Austria and Belgium, who finished only a point apart after the season-long competition concluded in Porto Cervo.

Nautor Swan promise 'something spectacular' for 2023

Highlights of the exclusive social events during the week included the Owners' Dinner at the Yacht Club Costa Smeralda, the event co-organiser alongside Nautor Swan, with a spectacular light show performance and limited-edition gifts for the owners by Salvatore Ferragamo, the Rolex Dinner Party at the refined Colonna Pevero Hotel, and the Final Prize Giving in the YCCS Regatta Village.

Speaking at the prize giving Nautor Swan Chairman Leonardo Ferragamo said: “I really want to thank so many people for making this week so spectacular, another milestone in the history of this great cooperation between Yacht Club Costa Smeralda, Rolex and Nautor Swan which has run for well over 40 years. It is the people behind the scenes that really make this event happen. Thank you so much everyone.”

And he added, to applause: “So many of you have said 'why do we have to wait two years before getting together again in this great event?' So, we have received the message and it's become an objective of ours to work on proposing something spectacular for the Grand Prix and the Maxi Swan yachts during the course of next year.”

The Rolex Swan Cup marks the conclusion of the 2022 Swan One Design season, though the ClubSwan 36s will compete in their own European Championships in Croatia next month.

The full season kicked-off at the Swan Tuscany Challenge back in April, with the focus then switching to the Swan Sardinia Challenge at the end of May. The Swan One Design Worlds followed in July, with Valencia the host port, before the iconic Copa Del Rey in Palma set the scene for the Rolex Swan Cup finale.