A great deal of effort has gone into planning the 2021 Caribbean regattas and the organisers are increasingly optimistic about entry numbers. They deserve your support... And you deserve some Caribbean tradewind fun

One of the most remarkable traits of those living in the Caribbean is that when adversity strikes, the result is a common strength of spirit in forging a way forward. This resilience, honed by natural disasters like hurricanes over the years, is as predictable and dependable as the steady trade winds that make the Caribbean one of the world’s best places to race. This spring, as borders were closed and regattas cancelled in the wake of the COVID-19 pandemic, organisers of the regions 14 major international sailing events immediately jumped on weekly Zoom calls to discuss how to navigate in the present waters, i.e. helping crews and boats get back to home, and to plan ahead. The result of this collaboration was a collective agreement that there would indeed be a 2021 Caribbean regatta season. Events will likely have “new normal” in place, as in the rest of the world. However, what will remain the same and in fact take on an even greater focus is the racing itself. What better way to social distance and have fun than in venues like the southern Atlantic Ocean and Caribbean Sea?

2020 Recap
The year 2020 started literally and figurately sunny and bright. Barbados Sailing Week and Grenada Sailing Week happened in January, St Maarten’s second annual Caribbean Multihull Challenge and the RORC Caribbean 600 took their starts in February and the St Maarten Heineken Regatta and Antigua Superyacht Challenge were held in early and mid-March. Then, proactive measures ordered by island governments to prevent the spread of COVID-19 as the virus ramped up to pandemic proportions across Europe and the US meant the region’s regatta season abruptly came to a halt. The St Barths Bucket and St Thomas International Regatta scheduled for late March, the BVI Spring Regatta & Sailing Festival, Antigua Classic Yacht Regatta, Les Voiles de St Barths and Antigua Sailing Week all in April, followed by the Antigua to Bermuda Race in May were all postponed or cancelled.

Looking Ahead to 2021
In general, cases of COVID-19 in the Caribbean have been fewer than in other countries and in many islands the pandemic is under control. What makes the region attractive for its multinational flavour creates a challenge for those planning to visit and race in more than one destination. That is, there is no one overall plan for managing the COVID- 19 pandemic in the islands. Each island’s government sets its national protocols. Regatta directors throughout the Caribbean have and are working closely to create safe events in tune with its government’s official mandates. It's best however to speak with each regatta’s organisers for up-to-date information about their event and what is required in their locality. Additionally, sailors who know now they will race should register early so organisers can plan their event accordingly.

Bring Your Boat or Charter
For those who want to bring their boats to race, yacht transport companies such as Sevenstar, Dockwise and Peters & May currently have autumn scheduled transatlantic crossings from the UK, Mediterranean and North America to the Caribbean. Depending on the company, ports of debarkation are St Thomas, the British Virgin Islands (BVI), Antigua, Martinique and Barbados. Most Caribbean nations opened their borders in the summer and have COVID-19 entry protocols in place for vessels and crews. Marinas and marine services are open as are hotels and restaurants, with requirements most prevalently for mask-wearing, hand washing, social distancing and the size of crowds.

A dry sail operation out of St Thomas means boats have a campaign base along with easy access to shipping in and out at the beginning and end of the season. Meanwhile, a new dry sail facility is being developed in the Port of St John’s, Antigua for the season.

Rallies such as the Atlantic Rally for Cruisers (ARC) and races such as the RORC Transatlantic are still going ahead and offer crew bound for the Caribbean a sociable way to make the crossing. This year, the ARC will have more than one start and end destination to prevent overcrowding at any one location. More than 100 vessels were on board for ARC 2020 as of July 1. While the ARC is primarily made up of cruisers, several major Caribbean regattas do offer cruising classes. Also, Antigua Sailing Week added a Club Class in 2018, that is open to boats sailing with just jib and mainsail as well as those with spinnakers. It’s targeted at those less serious racers who’d still like to participate in a major regatta. Scoring is via the CSA (Caribbean Sailing Association) Club Class Rating Rule.

For those who are looking for a competitive race across the ‘Pond’ the 7th edition of the annual RORC Transatlantic Race has been moved to Saturday 9 January and the host port for the start is once again Puerto Calero Marina in Lanzarote. Organised by the RORC in partnership with the International Maxi Association, this 2,995-mile OSR Cat-1 race finishes in the beautiful island of Grenada where the fleet is hosted by Grenada Tourism, Camper & Nicholsons Port Louis Marina and the Silversands five-star luxury hotel. The RORC Transatlantic race acts as a feeder for the RORC Caribbean 600 in Antigua in February and moving the start to January enables ample time for those competing in the Rolex Middle Sea Race to get to Lanzarote. The race is open to IRC classes with a minimum rating 1.004. The last edition was won for the first time by a two-handed entry, competing on the smallest boat in the fleet, but the race attracts everything from maxis to multihulls, superyachts and Class40s to classics.

Race and bareboat charters are alternative ways to join in the fun. Advantages are the opportunity to fly in crew and jump on a turn-key raceboat. Many yacht bookings for events cancelled in 2020 have rolled over to 2021, but race charter and bareboat operators confirm there is still good availability.

On the race charter front, UK based LV Yachting charters two highperformance catamarans, a TS5 and an Outremer 5x; plus racing yachts including a Swan 80, GP42, Marc Lombard 46 and JPK1180; and a Grand Soleil 50 racer-cruiser for several Caribbean regattas. Similarly, Canadian-headquartered Ocean Racers charters its Pogo 12.50 racer-cruiser, and Antigua-based OnDeck offers a Beneteau 40.7, Dehler 39 and Farr 65 for race charter. These are just three of the companies that base their race charter yachts in the Caribbean for the winter and spring regatta season. There are several other companies, headquartered both in and out of the Caribbean, that do the same. New this year, the CSA will have all race charter boats available for the Caribbean regatta season listed in one central place on the organisation's website (caribbean-sailing.com/yachtcharter). Beyond this, some events have their own race charter fleets. For example, the St Thomas International Regatta offers its club-owned fleet of IC24s for one-design racing. Combined with entries from Puerto Rico and the BVI, this class often sees over 20 boats on the start line. Similarly, Antigua’s National Sailing Academy charters its 24ft Cork 1720s.

Bareboat fleets are especially popular and competitive in the St Maarten Heineken, BVI Spring Regatta and Antigua Sailing Week. For example, more than 40 bareboats raced in four classes this year in St Maarten. Major charter operators include Sunsail/Moorings and Dream Yacht Charters, with bases throughout the Caribbean and several makes and models from which to choose. In general, bareboats tend to be 40ft to 50ft in length and include brands such as Beneteau, Jeanneau, Dufour and Hanse. At some events such as the BVI Spring Regatta and Antigua Sailing Week there are often onedesign classes withing the bareboat fleet making the racing even more competitive.

New Normal Racing
One race format that may feature even more prominently in 2021 is distance courses, using pre-set marks such as government buoys and rocks, isles and cays. Distance racecourses have grown in popularity in the last several years in Caribbean regattas. For example, the star of Barbados Sailing Week is a 60-mile round the island race. For 2021, the Caribbean Multihull Challenge introduces a 60-mile sprint that winds its way from St Maarten to St Barths and Anguilla and back.

The St Thomas International Regatta prefaces its traditional threeday event with the Round the Rocks Race, a circumnavigation of the 19- square mile US Virgin of St John. In 2021, in celebration of the 50th anniversary BVI Spring Regattas, organisers will run the 165-mile Full Moon race that circumnavigates the entire BVI. Les Voiles de St Barths is notable for its Richard Mille Record Trophy race, a 34-mile course to St Martin and back that’s perfect for this event’s featured entries like 100ft Maxi yachts. Antigua Sailing Week too runs its 52-mile Peters & May Round Antigua Race to kick off its event. Caribbean venues are perfect for these types of courses, where skill and tactics in reading sea currents and wind shadows in the lee of islands are as important as boat handing around the buoys.

Another enhanced dimension may be the addition of single or doublehanded racing. For example, Antigua Sailing Week added a new doublehanded class in 2019, where the entries included an Open 40, Swan 44 and Oyster 49. There will also be a continuation of Sport Boat Class, offered at the St Maarten Heineken Regatta and Antigua. This class is for small planing boats like the Melges 24, J/70 and Mini 650.

In the face of what will be a new normal going forward, it’s the Caribbean’s long-standing and timehonoured tradition of delivering fantastic racing that will be the mantra for 2021.
https://caribbean-sailing.com 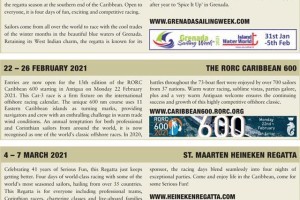 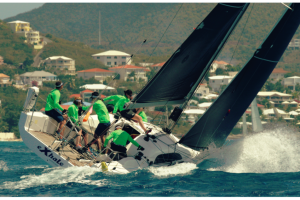 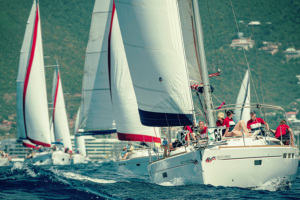 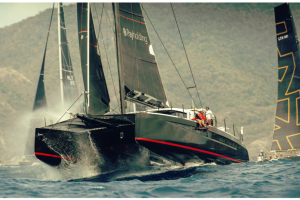 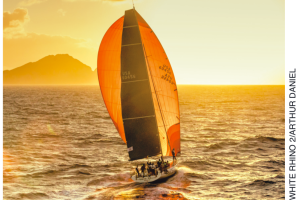