The team’s Sustainability Policy defines the mission and vision of the team, while also committing the team to feature sustainability as a core value, demonstrating leadership, innovation, collaboration and leaving a legacy that ultimately benefits ocean health. These four pillars are represented in the team’s Sustainability Compass unveiled as part of the policy that will be integrated throughout the team’s campaign for The Ocean Race in 2021-2022.

“Just like a compass is the principal tool that has guided seafarers through the ages, our team’s Sustainability Compass will guide us in running a campaign that is sustainable, leaves a legacy and has a positive impact on coastal communities, the maritime industry and the sport of sailing on the whole. We only thrive when our ocean thrives,” said Towill.

“As life-long sailors, the members of the 11th Hour Racing Team are committed to being advocates for the ocean and lead by example in all aspects of our campaign, keeping the health of our ocean at the forefront of our decision-making process while promoting positive, systemic change, and inspiring fans to take action for the ocean,” said Enright.

All individuals joining 11th Hour Racing Team will go through an orientation process educating each person on the climate crisis and critical issues facing our ocean today and the ways in which everyone can make a difference. Team members commit to being advocates for the sea and creating a positive social impact.

The team itself is committed to:

“The team has aligned its Sustainability Plan around key international sustainability objectives and standards, including the United Nations Sustainable Development Goals (UN SDGs). The team has set impressive sustainability targets, and through rigorous measurement will be able to disclose how they have taken action to support the global goals,” said Jill Savery, Sustainability Director for 11th Hour Racing, the team’s title sponsor.

Thursday’s signing is a significant step towards finalizing the team’s comprehensive Sustainability Plan that is due to publish in the early part of 2020, outlining how the team will adhere to its pillars, 12 key goals and a comprehensive set of associated targets in line with the UN SDGs and World Sailing’s Sustainability Agenda 2030. Before that plan is released, the team already intends to use software to map its supply chain and apply Life Cycle Analysis to its boat building operations.

Munro, Foxall and more than half a dozen other members of the 11th Hour Racing Team took part in Wednesday’s beach clean at Le Havre Beach, picking up and sorting waste found along the shore. The two Bluewater refillable water stations located on-site in Le Havre were made possible by 11th Hour Racing and will be moved to the team base in Brittany after this event to provide water without any use of single-use plastics. 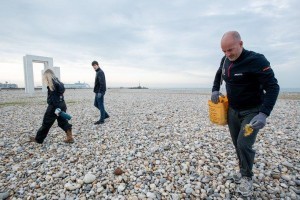 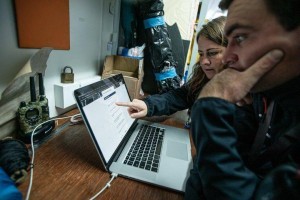 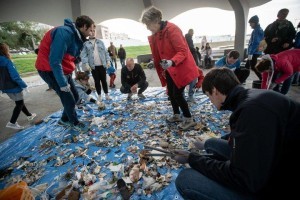 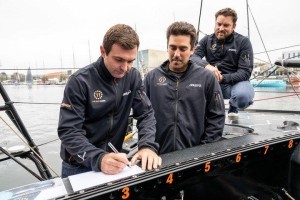 The Ocean Race and Archwey partner to tackle marine plastic

The Ocean Race launches Generation Ocean to protect the ocean