Hopes were high for an opportunity at a world record run on Saturday for the Land Speed team out on Lake Gairdner in South Australia.

The forecasts did indicate some good opportunities for some 20+ knot breezes, however those required winds were in disappointingly short supply explained pilot Glenn Ashby. “Unfortunately we haven’t quite had enough breeze out there. We had a few tiny puffs come through that were just over 20 knots but they were super short lived and basically never had the wind strength to crack into any decent numbers.”

Most of the runs undertaken by Horonuku were in around 17-18 knots of breeze from the NNW, which while short of the required wind speed for any record breaking runs, did allow Ashby to get a number of runs up to 184km/h allowing him to tweak the balance and control of the craft which he is becoming increasingly comfortable with- at times effortlessly floating the windward pod off the ground while travelling over 180km/h. 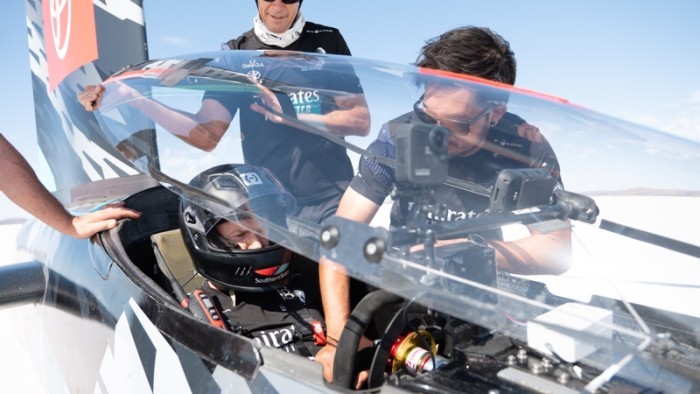 Ray Davies who is on the ground as part of the Land Speed team was impressed at the increasing control Ashby is developing after one run feeding back to Ashby, “That was a really nice run for control, it just looked like you were flying the pod beautifully then.”

The team remains optimistic at another opportunity for increased breeze on Sunday with the forecast models of the day being favourable for the wind to provide a few more knots of wind speed now out of the SW of possibly between 20-24 knots.

“We are all like coiled springs at the moment and are ready to react at a moments notice, so will be out on the lake ready to roll in the optimal breeze which is looking like arriving much later in the day.” said Ashby.