Yesterday at 10:00 UTC off the Chaussée de Sein, few boats had dared to venture outside. In fact a powerful NNW’ly wind of around thirty knots was sweeping across the race zone, picking up very lumpy seas worthy of those familiar to the latitudes of the Deep South. Aggressive and rather unique conditions for a race start, the Maxi Edmond de Rothschild and her three rivals nevertheless managed to set sail on the 1st edition of the Brest Atlantiques. After around ten or so tense hours, trying to hunker down in a rather inhospitable Bay of Biscay, the 32-metre giants were able to make the most of the more manageable conditions on the approach to Cape Finisterre. This morning, with Macif and Gitana 17 leading the way, the fleet is still slipping along on starboard tack at over 30 knots and is already level with the latitude of Lisbon! With some 740 miles covered in 24 hours, at an average speed of 30.8 knots, suffice to say that this big looped-circuit of the Atlantic has kicked off at a blistering pace.

“The idea was to be in the mode of ‘follower’ for the first few hours of the race. We know we can go very fast in these conditions with the Maxi Edmond de Rothschild but our aim was not to set the pace, rather we wanted to be conservative observers so as we could approach Cape Finisterre with a boat operating at full potential”, explains Cyril Dardashti, General Manager of the five-arrow racing stable, before applauding the control shown by its skippers in the opening miles: “Franck and Charles have managed their race start to perfection by demonstrating caution and yet still very much in the match at the head of the race. They had to negotiate some very boisterous conditions, the likes of which we haven’t encountered on the Maxi before and it was necessary to find the right balance, which is what they’ve done. Right now, we can really get to grips with the race and that’s what the team’s been working on the whole year.”

In fact, the first words from our onboard media man, Yann Riou, despite being accustomed to the toughness of conditions offshore, testify to the full-on nature of the race start: “It had been a while since I’d seen sea conditions like those. I think the last time was at 50° South during the Volvo Ocean Race. Today, I’ve had the unusual sensation on the boat of feeling very small.”

Inside track at the TSS

It’s a relatively classic pattern that played out early last night on the approach to the Iberian peninsula. The race boats must respect the TSS, or Traffic Separation Scheme, off Cape Finisterre. At that point, the question is always the same: take the inside or the outside track at this particular juncture, each option having its pros and cons of course. At this first passage point, the fleet of Ultims was split 50/50, since the Maxi Edmond de Rothschild and Actual Leader opted to hug the Galician coast, whilst Macif and Sodebo Ultim favoured the offshore route.

This divergence of viewpoints is explained to us by Yann Riou, who was contacted this morning: “Yesterday evening, we chose to take the inside track at the Finisterre TSS. This conservative choice enabled us to retain a course where we could bear away a little in the Bay of Biscay. As a result, we shaved the Galician coastline! We saw lighthouses, boats and were even entitled to a bit of 4G. To accompany all that, I treated myself to a few slices of local ham. At the same time, the sea and the wind conditions calmed down dramatically, enabling us to fuel up on food in a more normal manner. It proved to be a bracing night though with a few manœuvres, a high average speed and not always great visibility.”

The Doldrums already in their thoughts

Life is fast-forwarded when you’re making headway at an average speed of over 30 knots! Brest yesterday at 10:00 UTC, the latitude of Lisbon this morning on the first day of racing and already brains are busy scrutinising the entry point for the Doldrums, which should be possible at the start of this weekend. “Today’s aim is to hunt down a wind shift in the Azores High and in doing so we must negotiate a ridge of high pressure, which is stretching out its fingers in line with the Strait of Gibraltar. This ridge of high pressure is not very active, so there will still be wind inside it, which means we’re not expecting any significant stalling. Aboard the boat, it’s a big day today as the wind will shift round as it eases and we’ll have to carry the right sail configuration. We’re currently refining the point at which we’ll put in a gybe and that’s important as that’s what will determine the point at which we enter the Doldrums at the end of the week.”

Though the first 24 hours of racing have been coloured by a wet and bracing atmosphere, “hard hat” conditions to use the expression of our weather router and hence not very favourable for the competition, the race is gradually reasserting itself as the onboard media man highlights: “At the change of watch this morning, Franck and Charles showed a certain amount of satisfaction on learning that they were ‘already’ at the latitude of Lisbon – or nearly.” To Franck’s mind, “after a prudent start to the race in extreme conditions, we’re gradually getting into race mode”.

There are twelve men competing in the Brest Atlantiques; eight sailors and four media men. This specificity of having a reporter aboard each Ultim, an idea inspired by the Volvo Ocean Race, was an element that certain teams wanted and a request was made to the organisers when designing this new race. After just a few hours at sea and given the incredible images sent from the Maxis, this decision has proven to be entirely pertinent. For thirty days, these rather unique sailors – who it’s worth pointing out are not allowed to assist the skippers with the boat’s performance in any way – will be the privileged witnesses of a certain ‘intimacy’ aboard, thus providing a wonderful insight into what is a little known domain: daily life onboard.

=> ONBOARD VIDEO: The first few hours of the race by Yann Riou

Ranking on Wednesday 6 November at 11:00 UTC 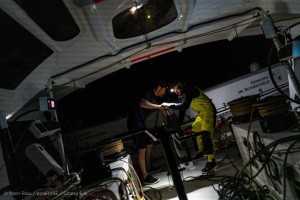 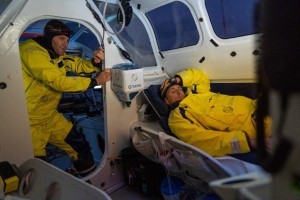 Brest Atlantiques - Flying at over 30 knots off Gibraltar

The Ocean Race: Imoca sailors line up for the doldrums crossing

The Maxi Edmond de Rothschild continues her standby in Lorient

The Rhum is an immense pleasure for sharing