MAPFRE stronger still after their podium position in Auckland

MAPFRE stronger still after their podium position in Auckland

After nearly 21 days of sailing through the Pacific and over 6000 miles between Hong Kong and Auckland (New Zealand), MAPFRE crossed the finish line this afternoon in third place, and in a breathtaking final, where nothing was to be decided until the very last minute. Xabi Fernández and his crew, Charles Caudrelier’s Dongfeng and Dee Caffari’s Turn The Tide On Plastic battled it out for the last 50 miles of the leg, off the eastern coast of New Zealand, with the Spanish boat finally gaining a podium position once again behind Simeon Tienpont’s AkzoNobel, who claimed victory of the leg.

It was a complicated leg for the six participating teams. Crossing the equator and the passage through the Doldrums proved once again to be a major source of frustration and deliberation for the navigators. On board MAPFRE, skippered by the Basque two-time Olympic medallist the team’s objectives were clear from the very start.

The battle for leadership of the round-the-world race had the Spanish VO65 involved in an intense battle with Dongfeng, their greatest rivals on the overall scoreboard, from the very start of the leg, and for more than 6000 miles, the Spanish boat, sailing under the Real Club Náutico de Sanxenxo, and Charles Caudrelier’s team were in sight of the other on several occasions. Xabi Fernández and his crew were forced to stay on their toes, with a continuous fight on their hands mile after mile, and inch by inch; and which would not be resolved until the very last minute.

A breathtaking final
On Monday, with more than 24 hours still to go until the finish, MAPFRE and Dongfeng continued head to head for fourth place, 80 miles from Dee Caffari’s Turn The Tide On Plastic, who were in third place on rounding the first cape of the North Island in New Zealand. From this point onwards, the leading group came into increasingly light conditions, and a final compression of the fleet, in the early hours of Tuesday morning saw MAPFRE, Dongfeng and Turn The Tide On Plastic grouped with less than a mile between them in the fight for the third place on the podium.

Finally at 13:39h Spanish time, and just 22 minutes after the winners, Xabi Fernández and his team crossed the finish line in third place, with an advantage of almost three minutes over Charles Caudrelier and his crew, and five and a half ahead of the team skippered by Dee Caffari. Simeon Tienpont’s AkzoNobel were the winners of this sixth leg of the round-the-world race, ahead of David Witt’s Scallywag in second.

The result has enabled MAPFRE to increase their lead over the fleet on the Volvo Ocean Race general scoreboard by one point, with a total 39 points ahead of Dongfeng’s 34 in second place. Behind them, Scallywag are third in the provisional general classification after the six legs sailed so far, with a total of 26 points.

The Spanish crew will now enjoy several days of rest in New Zealand, whilst the MAPFRE shore crew, start work to ensure that the boat is ready and prepared for the next leg. The start of leg seven, 7600 miles from Auckland to Itajaí (Brazil) will be on 18th March and scores double.

Xabi Fernández, skipper
The 20 days of the leg have been crazy. We were waiting for opportunities before, particularly in the Doldrums, but our big chance came today, just when we very least expected it. We knew we were going to come to a standstill when we reached the coast, but not to such an extent, and in the end we saw that we were close to actually winning the leg.

In the last few miles we had a great deal of wind and sail changes, and Dongfeng came up really fast behind us and almost overtook us. We are really tired, and I suppose that they are as well. We can see by the results that it has been a really tricky leg, where people have been taking risks, and those who were really behind, have gone on to win the leg. So we couldn’t let them win the leg, and have a bad result, and I suppose that it was the same for them. We were really close the whole way through.

Willy Altadill, trimmer/helmsman
We knew we had a remote chance of catching those ahead of us, but it was very remote indeed. We were focussed on overtaking Dongfeng, but the fleet compressed on the approach to New Zealand, and that was where we got our chance, and we made the most of it.

I think this has been the toughest leg so far, because it is where we have been closest to the other boats. We didn’t have a good passage through the Doldrums, but we were able to make up for it, and gain a little more ground on Dongfeng, which is what is most important.

This leg has been very much about the boat speed, and trying to do a good job against Dongfeng, who have a very fast boat, and well, we didn’t have too much luck at the start, but have managed to save the leg and have arrived happy.

Támara Echegoyen, trimmer
It has been a really complicated leg, not only for its length, but because of the conditions we have had. We have been fighting with Dongfeng from the start. We know they are one of our main rivals, and we wanted to keep them close, so many of the decisions we made, was with that in mind.

Half-way through the leg we were behind in the fleet, but in a leg like this, there are many variations, transitions, and wind changes and it is very easy to catch the fleet, which finally proved to be the case. In the last few miles, the first three boats were becalmed, and we were able to make up the miles, and claim third place.

We are now going to enjoy our result and have some rest, since the next leg is going to be tough. 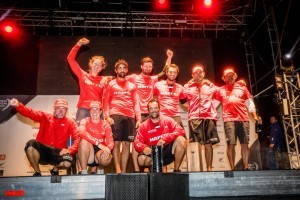 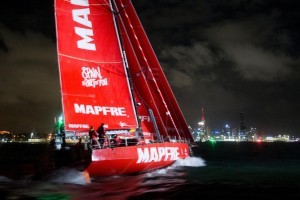