With IMOCA class and Race Committee representatives and skippers in Monaco to see the facilities, the Yacht Club de Monaco took full advantage to unveil details of the Monaco Globe Series, a qualifier for the next Vendée Globe.

Being organised by the Yacht Club de Monaco from 1-8 June 2018, it is the first non-stop double-hander offshore race around the Western Mediterranean and will depart 3rd June.

As these boats rarely come to the Med, the event will start with a two-day prologue in the form of runs or fleet races on an inshore course so sailing fans can see them in action. “Four years after the inauguration of our new building, the Yacht Club de Monaco intends to ramp up its sailing policy, to give it a new international dimension, with major events like the Monaco Globe Series. In line with our Club’s missions, and part of Monaco’s Capital of Yachting ambitions, we want to play our part in the Principality’s appeal as a destination,” explains YCM General Secretary, Bernard d’Alessandri.

Unprecedented route round the Western Mediterranean

On a 1,300nm course round emblematic landmarks in the Western Mediterranean (Sardinia, Sicily and Balearic Islands), the Monaco Globe Series offers a sprint comparable to the 110m hurdles, with obstacles like the Strait of Bonifacio, not to mention all the vessels from fishing boats to pleasure boats and cargo ships, always very numerous at this time of year. Teams will need to be extra vigilant, with back-to-back manoeuvres likely, and expect a range of weather conditions. Four days and four nights of sailing look set to be very intense!

10 boats on the start

Although the closing date for registrations is not until 1st April 2016, six boats have already confirmed their participation.

Leading the field is Pierre Casiraghi, Yacht Club de Monaco Vice-President and the man behind the project, sailing with Boris Herrmann on Malizia II. “It’s a real pleasure for us to host such exceptional boats and organise an event like this which I know will leave its mark on our Club. It’s important to inspire our youngsters by hosting meetings like this one, with an educational aspect to it. We also want everyone to discover the Mediterranean and would like to thank our friends, the clubs Circolo della Vela Sicilia, Yacht Club Costa Smeralda and Club Maritimo Mahon who spontaneously agreed to be involved with this race,” commented Pierre Casiraghi.  He recalled that for the last ten years, the YCM has helped run the Palermo-Montecarlo, a 500nm offshore race organised by the Circolo della Vela Sicilia.

“We are delighted to be associated with this new race. And I am very impatient to see this fleet in the Gulf of Mondello. Last year for the Palermo-Montecarlo was the first time we saw Malizia II led by Boris. With two wins under his belt in 2013 and 2014, Pierre may have a little advantage over the other competitors as he knows the course well, even if the route is in the opposite direction to the Palermo-Montecarlo,” said Agostino Randazzo, President of the Circolo della Vela Sicilia, Challenger of Record of the 36th America’s Cup.

It will also count on a new generation of rising stars like Louis Burton (Bureau Vallée) and Paul Meilhat (SMA), a strong candidate for the Vendée Globe 2020 having come 2nd in the last Transat Jacques Vabre. “The Monaco Globes Series is the first event of the championship, in the lead up to the Vendée Globe 2020 which I would love to be part of. It’s important as it is the start of the next Vendee’s history. This will be my first IMOCA race in the Mediterranean. Wind conditions are always difficult, strategy is key, particularly the Corsica passage and Sardinia; as a competitor, we’re looking at lots of manoeuvres. It’s going to be intense - it’s going to be fun!”

Alongside the sporting challenge and chance to rack up points for the Vendée Globe, the event is a great public relations opportunity, being in the Mediterranean, for contestants like Paul Meilhat (SMA) and Fabrice Amedeo (Newrest – Art et Fenêtres).

Women will also be on the start with Alexia Barrier (4myPlanet), a newcomer to the IMOCA class, and Isabelle Joschke, represented by Alain Gauthier. “Isabelle is a great believer in diversity and has her sights set on the Vendée Globe 2020. We are also delighted to be coming to the Mediterranean on a tactically difficult route. I don’t know yet if I will be at her side but very happy to come to Monaco.”

Mediterranean in the spotlight

Keen to share this unique event with the maximum number of people, SSI-Monaco Sat (Inmarsat partner) is providing its satellite video and voice communication service via the Inmarsat satellite network free of charge to teams so they can broadcast photos and videos. It is a great opportunity, not only for them to share their race and the beauty of the course, but also testify to the state of the marine environment. The course traverses the Pelagos Sanctuary and skippers are likely to see many marine mammals and cetaceans that call the Med home. 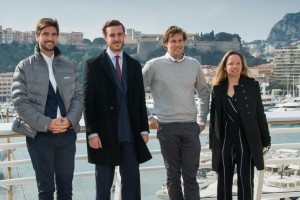