Victory to SMA over Monin: experience has spoken

It was 08:17 this Thursday morning when SMA skippered by Paul Meilhat and Gwénolé Gahinet crossed the finish line of these first Monaco Globe Series, that kicks off the new world championship IMOCA 2018/2020, organised by the Yacht Club of Monaco. It was an intense and thrilling race down to the last few miles for the winners as well as the rest of the pack, with HSH Prince Albert II there to meet the victorious pair on the quay.

Take nothing for granted till the finish was the philosophy of those competing in this double-hander, non-stop unassisted offshore race which started from Monaco at 1.00pm last Sunday, with the first boats arriving in Monaco bay at sunrise. It took SMA 3 days 19 hours 17 minutes in a battle all the way round.

“It’s weird sailing by sight after so many miles,” confided Paul Meilhat when he stepped ashore. “It was not really won, and we had to stay focused to the end. It was a magnificent course; we must organise one in the Mediterranean every year!”

Newrest-Art & Fenêtres pairing of Fabrice Amedeo and Eric Péron pulled out all the stops to stay glued to SMA’s transom before Ile de Bagaud (Var coast). A game of cat and mouse which continued over several miles until the Bretons decided to cut short the competition’s ambitions by hugging the coast to take full advantage of the slightest gust.
A race within a race

Another hard-fought duel was that between Newrest-Art & Fenêtres and Monin, which was finally won by Isabelle Joschke and the highly experienced Alain Gautier. His impressive list of trophies certainly tipped the balance. The mixed duo snatched second place by a nose from Newrest-Art & Fenêtres, just seven short minutes ahead.
One after the other the rest of the fleet crossed the line, Kilcullen Team Ireland first followed by Boulogne Billancourt, Groupe Setin, Malizia II, Bureau Vallée 2 and finally 4myPlanet2. Alexia Barrier and Pierre Quirogea were surprised and delighted to be greeted by all the skippers when they arrived on the Yacht Club de Monaco’s pontoons. Proof of the spirit of fair-play that reigns in the IMOCA class.

“It was a really superb race with a lot of twists and turns to it,” said Pierre Casiraghi sailing on Malizia II. “It was tough in the Strait of Bonifacio then the battle to beat back up to Port-Cros as the fleet was in the process of regrouping.” The YCM Vice-President was sailing with Boris Herrmann for whom “the Med really lived up to its promises with a range of very varied conditions. An intense race and amazing to experience”. The Monegasque 60-footer finished 7th just behind Manuel Cousin and Alan Roura on Groupe Setin who ratcheted up a gear on the final straight. A successful race all round.

Prize-giving is tomorrow at 6.00pm at the YCM, and as its World Oceans Day there will be an “Appeal for the Ocean” signed by all the skippers, at the instigation of famous French sailor, Catherine Chabaud. 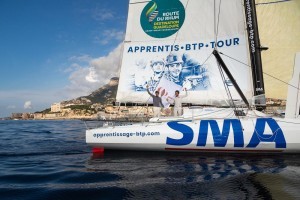 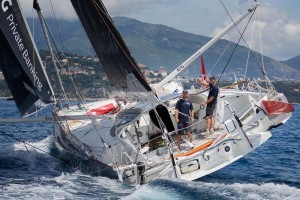 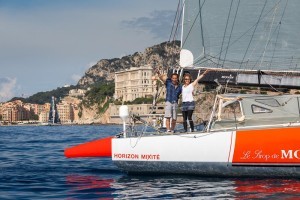 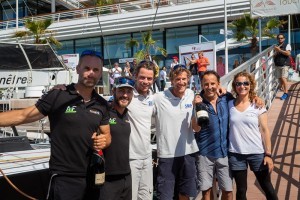 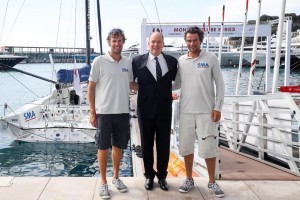