A month before the start of the Solar & Energy Boat challenge - putting the spotlight on latest innovations in yachting - Bertrand Piccard, sponsor of the 5th edition, was in Monaco.

The Swiss aeronaut behind Solar Impulse, the solar-powered plane in which he flew around the world, was keen to show his support for participants in this event to promote green propulsion systems.

Video message from Bertrand Piccard: https://www.facebook.com/yachtclubmonaco/videos/1881276628601619/ Launched in 2014 by the Yacht Club de Monaco, it continues to evolve. This year it opens to other clean energy sources as well as solar power.

For this fifth edition, solar energy will again be the star of the show with speeds averaging 20 knots, in the traditional contests over three days in Monaco Bay. This year, the endurance fleet race and timed one-on-one slalom duels are being sponsored by Bertrand Piccard.

“When I saw what they can do with foiling solar or hydrogen powered boats which lift off the water producing some tense races, and all this without noise or pollution, I thought this is something that needs to be encouraged.” Supported by the Prince Albert II of Monaco Foundation, Hydros Foundation and International Powerboating Federation (UIM), this competition is unique in the world, giving young engineers an opportunity to reinvent boating to meet future energy and environmental imperatives.

“It is part of the Principality’s commitment to the environment led by our President HSH Prince Albert II. If we want to position Monaco as Capital of Yachting, we need to play a part in these technologies,” says YCM General Secretary, Bernard d’Alessandri.

Also new this year, the YCM has introduced a brand new concept with the Monaco Energy Class. Engineering students working with industrialists have been given a one-design catamaran hull specially designed for this competition. The challenge is to build a cockpit for their boat and design the most powerful and durable propulsion system possible from a given amount of energy. Bio Fuel, battery, hydrogen, compressed air, LNG, etc. – the choice is wide, but it must be a clean source.

“The purpose of this event is to bring new solutions and compare them with each other. You need to know that the internal combustion engine in terms of pure propulsion gets only 30% out of the energy capacity of 1 litre of fuel, compared to a fuel cell that attains about 90%. So why aren’t we seeing more fuel cells and new more efficient systems than the combustion engine?” asks Jérémy Lagarrigue, President of HYDROS Efficiency and organiser in Saint-Tropez of the Hydrocontest, first student competition dedicated to maritime energy (working on hulls).

With another edition comes another destination for the offshore race, which this year takes participants to Ventimiglia in Italy. Boats must comply with YCM Offshore Class rules, which means being able to take three people and meet technical specifications defined in collaboration with the UIM.

“The aim is to highlight the enormous potential of our young engineers supported by the shipyards. We have a common goal, which is to work together to build the leisure boats of tomorrow,” explains Marco Casiraghi, himself an engineer and the man behind the project.

The two harbours are set to be interconnected soon, but meanwhile this race serves as a big test for renewable energy end-users.

A showcase for new technology after Planet Solar in 2014, the 2018 Solar & Energy Boat Challenge hosts the oceanic drone Sphyrna, the largest civilian surface drone in the world (17m), with an electric motor powered by solar, wind and tidal energy. It is here on a mission this summer to help assess noise disturbance on cetaceans in the Pelagos Sanctuary, supervised by Professor Hervé Glotin from Toulon University and François Sarano, former scientific advisor to Captain Cousteau and member of the YCM’s Explorers Club.

Monaco has a history of being at the forefront of technology. Over a century ago, pioneers of another type of propulsion system descended on the Principality to present their latest developments at an annual powerboat meeting attended by the big industrialists. A tradition of sharing recreated, as every evening participants in the Monaco Solar & Energy Boat Challenge discuss their work on Open Source.

All share one ambition: to reinvent propulsion systems for the future, relying on existing renewable energy sources and respect for the environment. 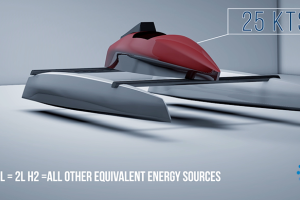 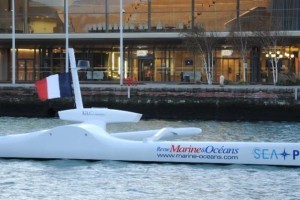 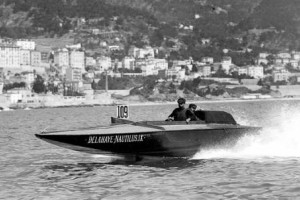 The Yacht Design & Innovation Hub merges with the Designer Gallery