Evo Yachts will be attending its first Palm Beach International Boat Show from March 21 to 25, where it will be showing the shipyard’s Evo 43’ HT in the new matt grey version. The partnership continues with G-Marine, the shipyard’s exclusive dealer for Florida, Mexico and the Caribbean, whose stand will host the model at the show. Building on successful appearances at previous US boat shows, the shipyard and its dealer have decided to further strengthen their presence on the US market, presenting the boat for the first time at the Palm Beach International Boat Show and confirming just how successful this 43-footer has been in the United States.

March 2018. Neapolitan shipyard Evo Yachts continues its push into the American market and consolidates its presence at US boat shows by attending the Palm Beach International Boat Show from March 21 to 25. Making its first appearance at this American boat show, the shipyard will be exhibiting EVO 43’ HT, the jewel of the range, which won the admiration of the public at the recent Fort Lauderdale and Miami Boat Shows. During the event, Evo 43’ HT will show off its new matt grey livery at the stand taken to the show by US dealer G-Marine.

Evo Yachts, which has always had a reputation for listening to customers’ needs, has introduced new optionals for American owners to further upgrade the basic model. They include the double BBQ grill, ice maker and microwave oven in the dinette, plus tropical-grade air conditioning.

David Galante, Chief Operating Officer of G-Marine, says he is confident that the Evo 43’ HT will be a huge success at the show: “We are fully aware of the growth and the many different styles that the South Florida market offers yachting and we’re sure that the Italian style and elegance of Evo 43’ will arouse great interest with the public at Palm Beach”.

Evo 43’ HT, the celebrated model built by Blu Emme Yachts, is already a big international success story, not least because of its elegant and refined design by Valerio Rivellini for Studio Tecnico Rivellini. The lines are not only sculpted and muscular, but also streamlined and minimalist, encapsulating the concept of form & function with a straight bow and high sides that sweep harmoniously back to the stern. The unique feature of the HT model is the carbon T-Top which extends electrically towards the stern, increasing the shade in such a way as to maintain a delicate stylistic balance with the lines of the hull.

But Evo 43’ HT isn’t only design, comfort, form and function. The yacht is equipped with a beach area that can be fully personalised with the help of the hydraulically extending “Xtension” sidewalls and the Transformer multi-function platform, which can be used to board and disembark when the yacht is anchored at dock, and also as a sea ladder, a dive platform or as support for a tender and water toys. The deep-V hull with 18° deadrise and two 435 hp VOLVO PENTA IPS 600 engines translate into a top speed of 38 knots and a cruising speed of 28 knots. The boat can also be controlled from a tablet or smartphone thanks to the latest generation home automation systems.
Evo 43’ HT will be at the Palm Beach Boat Show from March 21 to 25. 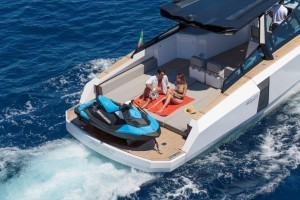 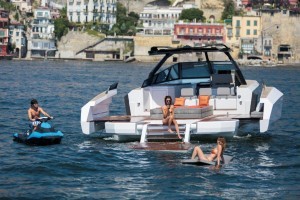