The French trimaran cruiser specialist founded in 2009, is now the world’s leading designer and manufacturer in its field. Created at the initiative of a team of professionals boasting over 40 years of experience in shipbuilding, offshore racing and long-distance sailing, the firm’s expertise is the result of the skill and strong commitment of the people who work there. The company fosters a healthy R&D culture and this is confirmed by a whole array of international prizes awarded to its boats: European Yacht of the Year 2018, Multihull of the Year 2018, Best Boat of the Year 2020, victory of the ARC+ 2019 transatlantic race.

30 models are produced each year under the expert hands of 120 employees. The firm’s projected turnover for 2020 is €20 million, it has a share capital of €3 million. A Banque de France listing of G3 proves the company is financially sound and trusted within the financial community.

The genesis of the Leen Project
Neel-Trimarans has complete faith in the nautical capacity of the trimaran, be it powered by sails or an engine. It has already proven that, on high seas, there is no safer vessel. The hydrodynamic resistance of its narrow hulls is extremely low. Trimaran engines are of moderate size, by necessity, and very economical in fuel. The Neel 47, for example, consumes less than a litre per nautical mile. Unbeatable! These vessels also have the advantage of being very stable out at sea. For cruising on high seas, a trimaran with an engine simply makes sense. This is why Neel-Trimarans decided to develop a motor-powered range too introducing Leen, the mirror image of Neel.

The Leen inherits all the renowned marine qualities of the Neel and benefits from the same trimaran-building expertise. These luxury vessels built for life at sea combine high-sea cruising standards with onboard comfort, autonomy and performance. Pleasure-boaters are seeking to push out the boundaries thanks to yachts offering maximum self-sufficiency, performance, comfort and reliability. This is the ideal trimaran in which to embark on an expedition (transatlantic autonomy) or cruise off the coast.

Designers
Bernard Nivelt is considered to be one of the best naval architects of his time. He has designed many cruising vessels and high-performance racing trimarans.
Pierre Frutschi, an architect who qualified at the University of Geneva, is also a yachtsman and a reputed naval designer. He specialises in large-scale “one-off” models of between 40and 100 feet, as well as mass-produced ranges.
Bernard Nivelt and Pierre Frutschi have known each other for a long time and now work together to achieve some great successes. Neel-Trimarans called upon this brilliant duo, without hesitation and in total confidence, to design the company’s new range of engine-powered trimarans.

Production methods
The expertise of Neel-Trimarans is based on attention to detail, a sense of creativity, and industrial rigour. The company has developed and tested its manufacturing techniques: assembly of composite panels infused on marble and assembled in a shaper. This method is particularly well adapted to the production of long, narrow, bilge hulls. The structure of the deck and hulls is vacuum-infused, a procedure which ensures maximum weight, better composite quality and low environmental impact. These production methods have been tried and tested, the costs are controlled and the quality is guaranteed.

Engine type
Leen trimarans are fitted with a heavy-duty, hybrid engine, this comprises a central heat engine and 2 electric side pods (beneath the hulls). The diesel engine is the main source of propulsion.
The electric pods are used:
Coupled with the diesel engine during port manoeuvres (thus replacing the bow thruster), or
As a silent electric engine to move off discreetly, or
As a back-up engine when coupled with a generator.

Eco-responsibility
The staff of Neel-Trimarans have been involved for a long time in the development of renewable energies, notably with the launch in 2018 of the Neel 51 Noos with its hybrid engine. So it is only natural that space is left onboard for solar panels and that the materials and equipment are selected and tested for reliability and longevity in order to limit the risk of built- in obsolescence. The 1st Leen has been sold to a client who already owns a Neel 51. He is convinced that the trimaran is the best-performing and most suitable boat for long-distance sailing expeditions. This buyer particularly appreciates the uniqueness and innovating spirit of Neel-Trimarans.

Construction of his vessel will begin next April, for delivery in January 2021.

Layout
The standard layout includes 3 double cabins with shower rooms. The owner’s cabin occupies the trimaran’s entire starboard side. The bed and office are on themain deck level and offer majestic views over the sea. The bathroom with shower and separatetoilet can be reached by a few steps down to the hull’s lower level. So the entire starboard hullis occupied by the owner’s quarters. The two other double cabins are fitted in the central and port-side hulls. The Leen 56 can be fitted with additional single-bed cabins and separate shower rooms. In the 6-cabin layout, the Leen 56 accommodates up to 10 passengers. The quality furniture is designed in light-coloured wood and made by quality cabinetmakers. The layout and fixtures of the outdoor areas (cockpit and flybridge) are left to the buyer’s desires. The flybridge is accessed from the cockpit, under the flybridge steps is a heated cupboard for jackets, oilskins, boots and diving suits. Outside, the side walkways run beneath a Portuguese-style deck which is a typical feature of real long-distance vessels.

Designed by Pierre Frutschi, the layout includes 4 double cabins with shower rooms. The owner’s cabin with private bathroom and office occupies the front part of the trimaran’s middle hull. A guest cabin with private bathroom is fitted in the back part of the middle hull, two other double cabins with private bathroom can be found in the hulls. The Leen 72 can be fitted with additional single-bed cabins and separate shower rooms. In the 6-cabin layout, the Leen 72 accommodates up to 10 passengers.
The wardroom and kitchen are on the main deck on the same level as the cockpit. The quality furniture is designed in light-coloured wood and made by quality cabinet makers.

The layout and fixtures of the outdoor areas (cockpit and flybridge) are left to the buyer’s desires. Access to the flybridge is via the cockpit or from inside via the deck lounge. Outside, the side walkways run beneath a Portuguese-style deck which is a typical feature of real long-distance vessels. 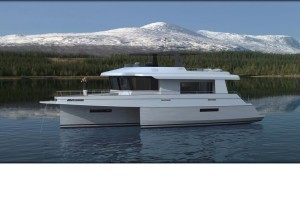 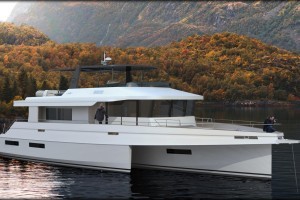 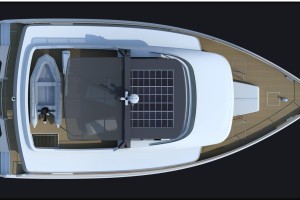 M/Y Vanadis: the perfect blend of timeless style and a hi-tech soul

Neel Trimarans announces the launch of our new model Neel 52

Leen Trimarans announcing the launch of our new model