“Citius, Altius, Fortius”: SEATIUS, the second unit of the SW96

“Citius, Altius, Fortius”: SEATIUS, the second unit of the SW96

CITIUS is the Latin world for faster, and the SW96’s owner couldn’t resist a play on words when choosing a name for his new yacht, SEATIUS: “The owner wanted a fast boat to sail worldwide in comfort,” says Jim Schmicker, vice president of Farr Yacht Design, who, together with Southern Wind and Nauta Design, is responsible for the yacht’s general concept.

The yacht’s owner approached the Southern Wind team some years ago and his path to the purchase of a new boat included diverse experiences both at the Shipyard in Cape Town and aboard several SWS yachts. Charters both in the Med and the Caribbean were a perfect way to experiment Southern Wind’s cruising soul and racing the RORC Transaction Regatta on board proved SWS yachts’ reliability and performance. After these experiences he was thoroughly convinced and ready to cruise long distance on his own 96’ superyacht: “As soon as he saw the drawings for the Southern Wind 96 he was won over” says Schmicker.

In fact, the second unit of the SW96 miniseries has been conceived and optimized for high performance worldwide cruising with a relatively shorthanded crew: exactly what he was looking for.

SEATIUS’ hull has full waterlines and straight end diagonals, a wide, low transom and full forward sections, which, together with the fixed bowsprit, the Cariboni lifting keel (3.4-5.5m) and a twin rudder configuration, make her easy to sail and control in any sea conditions.

“The twin rudder arrangement has turned out to be a fantastic feature,” adds Schmicker, “they work extremely well with the shallow draft of the lifting keel to allow access to many ports and anchorages. For performance and ease of handling they are superior to a single rudder. The installation arrangement of the rudders opens up enormous aft storage areas and includes easy adjustment of the toe-in setting of the rudders for optimum performance in changing sea and wind conditions,” he concludes.

To enhance the performance soul of the yacht a High Modulus carbon mast and Park Avenue boom as well as EC6+ Carbon rigging.

The yacht’s hull and deck are built in sandwich with foam core and infused carbon skins for lighter weight and improved sound insulation. Her lightship displacement of 58.500 kg grants excellent light wind speed with a manageable rig size.
The deck layout was designed for comfort and safety during long, blue water cruises as stated by Nauta Design’s Massimo Gino, who penned the deck layout and interior design.

"Differently from her sister Sorceress, SEATIUS has two lateral sunbathing areas divided by a central passageway that runs on one level so that guests don’t have to climb over coamings or furnishings,” Gino states. “This passageway also offers support when the yacht is heeled. A central island with a dodger protects the crew companionway and also has a seat where a crew member can keep watch during long transfers with an eye both on the yacht’s controls and on the sea,” concludes Gino.

A special feature that sets SEATIUS apart from her sistership, SW96#01 Sorceress, is a hardtop dodger that protects the guest cockpit that is separate and independent of the manoeuvring cockpit for privacy and safety on board.

“A set of carbon frame biminis provides an expanse of shade for both the forward and the aft cockpits,” explains Niki Jennings, technical coordinator at Southern Wind Shipyard, who followed the yacht’s construction from the outset. “Coupled with the rigid dodger, the deck is elegantly protected from rain or shine. The whole set is removable, leaving the clean SW96 deck unaffected in racing conditions.”

The deck covering is in Flexiteek, a popular choice that offers significant weight savings to performance conscious owners.
Seatius’ deck hardware was optimized for easy sailing in all conditions and includes longitudinal jib tracks, hydraulic cars and Cariboni Magic Trim for the mainsail amongst many other features.

A special feature on deck is an inflatable dinghy wet locker located immediately aft of the crew island.

SEATIUS’ interior layout sees a large owner’s suite fore, an ample VIP suite aft of the owner’s and port, a spacious saloon that opens onto a TV lounge, and an ensuite twin cabin aft of the saloon.

The owner’s cabin forward, in the quietest area of the yacht, offers wide volumes and ample storage, as Massimo Gino explains: "The essence of semi-custom construction is its flexibility and adaptability to owners’ different needs: SW96#01 SORCERESS features a four guest cabin layout to accommodate large crews for long offshore races, while SEATIUS has three guest cabins for comfort during long cruises. The three cabin layout makes for a larger owner’s suite with ample closet space and extra social space.”
The crew area aft features a double Captain’s cabin, 2 crew cabins and a spacious galley that opens onto the crew mess.
Elegance goes hand in hand with comfort aboard SEATIUS, and her interior styling sees the contribution of Dutch interior designer Jeroen Machielsen from Studio Hermanides, long a collaborator of the owners’.
“They chose a palette of light and dark woods that create contrast in the yacht’s interior décor” continues Gino. “The result is very pleasing. We worked closely with the decorator to create the best balance between interior geometries and the colours in the new and refined timbers he chose. The decorator also chose all of the materials used in the yacht’s upholstery. We enjoyed this collaboration very much and love the yacht’s final look,” concludes Massimo Gino.
Launched in mid March, Seatius underwent extensive sea trials where the owner got a taste of what the yacht can do. Back at the dock, there was a satisfied gleam in his eyes as he said, “It’s an amazing yacht: perfectly built, modern, easy to sail with small crew. People at SWS did a splendind job”.

SEATIUS’ owner will sail his SW96 #02 on her maiden voyage with a crew of professionals and some friends. The yacht will make her debut to the 2018 Mediterranean Superyacht Shows. 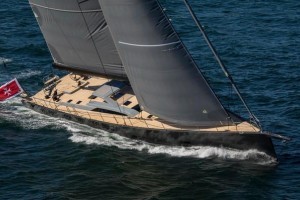 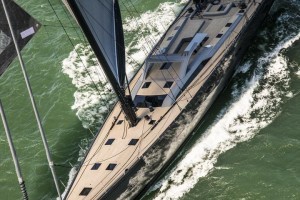 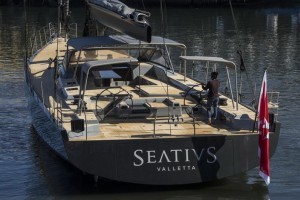 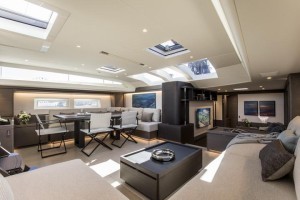 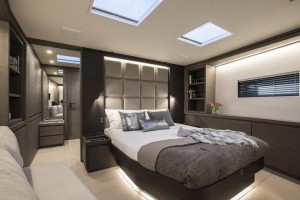 The second edition of the Versilia Yachting Rendez-Vous

U-Boat Worx unveils the Nautilus underwater superyacht at the Monaco

The Southern Wind Family Rendezvous flew on the Mistral Wings