Organized by the prestigious magazine Barche, this first International Design Competition is dedicated to the memory of Paola Galeazzi, architect and founder in 1972 of the Rome-based design firm together with Giovanni Zuccon. Jury chair: Giovanni Zuccon.

Paola Galeazzi (1947–2017), an architect who left an important legacy to the world of design and yachting over the last 50 years, was the inspiration for the first International Design Competition, organized by the Italian magazine Barche, which is celebrating its first 30 years in business this year.

“We decided to dedicate the award to Paola Galeazzi,” explained editor-in-chief Franco Michienzi, “because she is undoubtedly a benchmark for future generations of designers. This hugely capable naval architect taught much to the modern boatbuilding industry in terms of design techniques and philosophy, but at the same time she epitomized a culture of high ethics and honesty, and will also be remembered for her vision of the future, her insistence on sharing, and her capacity to maximize the results of teamwork”.

In 1972, along with her husband and fellow architect Giovanni Zuccon (who is to chair the competition’s jury), Paola Galeazzi founded Zuccon International Project, which has for over 50 years been considered one of the world’s most authoritative luxury yacht design firms, having penned some of the most beautiful models in the history of yachting. Examples include the Posillipo Technema 65, the 46-metre Baglietto Al Fahed, the CRN 125 J’Ade, the 80-metre Chopi Chopi, and the Sanlorenzo 102 Asymmetric, the latter being the work of the “new generation” of their daughter and son, Martina and Bernardo, not to mention 20 years of collaboration with Ferretti Group boatyards of the calibre of Custom Line and Bertram.

A contemplative and cultured woman, Paola Galeazzi was undoubtedly one of the most influential figures in the yachting world. She was a formidable professional of outstanding elegance and composure, a woman at once strong and authoritative. Alongside Giovanni Zuccon, she worked with some of the top Italian yards, contributing to the success of a market that still bears their mark. All of which thanks to a working partnership based on like-mindedness and complementary talents, and the capacity to turn their distinctly individual qualities into a great force for design.

“Thank you Barche! I’m extremely happy with this competition,” commented Giovanni Zuccon, “not only because it’s an important acknowledgement of the enormous commitment Paola put into her 46 years of constantly striving for quality in design, but also and above all because she managed at all times to achieve her prime objective, that of integrating and balancing the roles of architect, wife and mother”.

The competition (deadline for application May 30, 2023) is international and open to everyone under 35.  The competition’s jury (chaired by Giovanni Zuccon) will be formed by major figures in the field of yacht design. 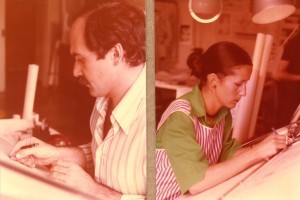 Vitruvius Yachts for the National Flagship

Zuccon International Project contributes to the success of Alloy