The twelfth edition of the YARE (Yachting Aftersales and Refit Experience) Networking event, held in and around Viareggio in Tuscany from March 16th to 18th, was preceded by a special kind of antipasto, the first edition of the Yachting Dinner Night. Held on the evening of March 15th, the event was organised by Towant and Ceragioli-Storakers.

The event began with a presentation at the Galleria d'Arte Flora Bigai Arte Contemporanea in Pietrasanta, Italy. Representatives from the shipyards The Italian Sea Group, Baglietto, Next Yacht Group, Nautor’s Swan and Rossinavi introduced the theme of the evening: a competition where they became chefs for the occasion by creating dishes that represented their companies.

The dinner was also held in Pietrasanta at Filippo Di Bartola’s restaurant Filippo and was attended by representatives from Royal Leather, Gaudio, Dornbracht, Marine Interiors, Model Maker Group, Cesana, Flos and NC Marmi. The attendees and the media representatives including Pressmare.it voted the evening’s best dish. Nautor’s Swan presented Swan Soul, an antipasto that featured Finnish smoked salmon, the Italian Sea Group presented Sinfonia Italiana, a pasta dish with ingredients that represented the colors of the Italian flag, Baglietto presented Rhapsody in Blue, a blue risotto that recalled the color of their logo, the Next Yacht Group presented What’s Next, a fish dish with Mediterranean flavors and Rossinavi presented Journey Through the Dessert, a chocolate cake cut in the shape of their logo. Rhapsody in Blue was voted the evening’s best although choosing a winner out of the many delicious dished presented was difficult.

The organisers see Yachting Dinner Night as the beginning of an itinerant project dedicated to the international yachting world that will be developed further with subsequent editions to be held in future locations around Europe. The relaxed and convivial atmosphere of this first edition bodes well for the future development of this interesting networking project. 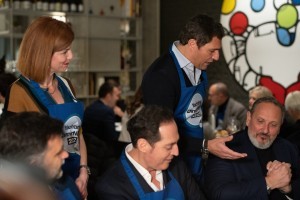 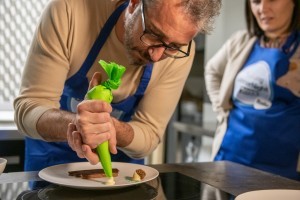 Masquenada the 51m Explorer, awarded with the Best Refitted Yacht

Persico F70, the adrenaline rush of flight on a hypercar of the sea